How to Tame a Wild Fireman by Jennifer Bernard 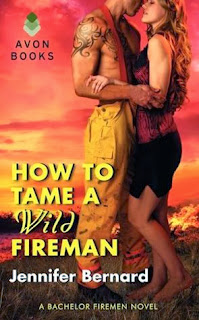 The Bachelor Firemen of San Gabriel have a rebel among them, and there's only one woman who can put his flames out.

Firefighter Patrick "Psycho" Callahan earns his nickname every day. Fast, fit, and a furious worker, he thrives on the danger which helps him forget a near-tragedy that changed his life forever. But when his off-duty carousing gets out of hand, Patrick is sent back to Loveless, Nevada, where the wildfire threatening his hometown has nothing on sizzling Dr. Lara Nelson.

Lara would rather be thought of as the physician who returned to Loveless than as the misfit brought up at a hippie New Age commune. But right now she's focused on her job at hand, patching up injured firemen...until the past hits her in the hard-muscled, blue-eyed form of Patrick Callahan. Now, the embers of their decade-old attraction have ignited into a full-on inferno, as the bad-boy firefighter and the good doctor take a walk on the wild side they'll never forget.

How to Tame a Wild Fireman is the fourth book in Jennifer Bernard’s totally awesome The Bachelor Firemen of San Gabriel series. All the books are fun, sexy, romantic… but there’s always a level of poignancy that brings out the “need to take him home and love him all better” in me.

This time the man in need of my tender loving care is Patrick “Psycho” Callahan. For ten years he’s been blaming himself for an accident that almost took the life of his mildly autistic, deaf brother. As the older, more mature sibling, he's supposed to be watching after Liam, not getting him into dangerous situations, and if Patrick had been doing his job, the accident would never have happened. Or so Patrick keeps telling himself. And to further prove his fault, Patrick’s dad, ex-governor of Patrick’s home town of Loveless, Nevada, is an arrogant, blow-hard of man who tosses Patrick not just out of the family home, but out of the family, period. With nothing to lose, thinking there's no one who cares, Patrick has more than earned his “Psycho” nickname. After one stunt too many, Captain Brody gives Patrick just what he needs - a chance to burn off some steam - by sending him to Nevada to help with the out of control fires that are threatening Loveless.

Lara Nelson grew up in Loveless, best friends with Liam Callahan. As Patrick’s younger brother, and always under Patrick's watchful eye, the three of them spent a lot of time together until the accident changed everything. She doesn’t totally understand why Patrick left the family the way he did, but it is what it is, and what it isn't is her business. Ten years have past since the accident, and Lara is settled, practicing Family Medicine at a San Diego hospital. Her life is right on track, but she gets a call that the aunt who raised her has passed away and, much to Lara’s chagrin, she’s the heir to all of Aunt Tam’s worldly goods.

Having no choice, Lara returns home to settle the estate, then jumps right into the thick of things, lending her medical expertise to helping care for injured firefighters working the blazes threatening Loveless. But working this closely with Patrick, Lara finds herself in a whole different kind of “thick of things.”

Like I said, I really love these books. They’re not just sexy, they’re truly engaging stories. The characters… their lives, their loves, their trials and their triumphs… every one of these “cursed” firemen are amazing, tormented, lovable people in need of women strong enough to put up with them. What? It’s true! These guys aren’t perfect, but they’re close enough for me! And the stories are always entertaining without being too fluffy or over-the-top dramatic!

Ms. Bernard is one talented author and, lucky for us, she puts that talent to work giving us stories we can get lost in and happily ever afters we can believe in.

My thanks to Avon Book and Edelweiss for providing me with a copy of this story in exchange for an honest review.

Posted by Blithely Bookish at 3:11 PM