One for the Wicked by Karina Cooper 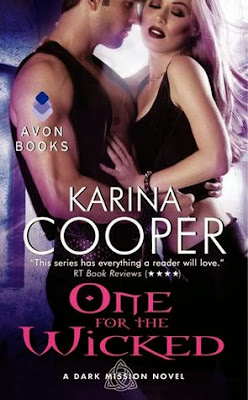 In this thrilling finale to Karina Cooper's Dark Mission series, New Seattle's witches will rise again…or fall forever.
Dr. Kayleigh Lauderdale possesses the only cure for what's killing the city's witches. Desperate to acquire it, the resistance sends their best agent, but Shawn Lowe has his own agenda, and it doesn't include saving anyone—least of all, the daughter of his sworn enemy. He has to ignore the blistering attraction he feels the instant they meet, because he can't give in until he gets what he wants. He just never counted on wanting her…
Kayleigh can't believe how out of control Shawn makes her feel. He lies to her with one breath and excites her beyond reason the next. A reckless encounter could steal her heart, while the danger hovering over the city may prove too much for either of them to handle. When the world turns upside down, it will take everything Kayleigh and Shawn have to hold on…to life, to hope, to each other.

One for the Wicked is the fifth book in Karina Cooper’s incredible Dark Mission series. It's the perfect balance of paranormal, urban fantasy, and suspense with a hard fought, well earned, happily ever after.

I was given books 4 and 5 to review and I wish I had taken the time to go back and read from the beginning. The plot is quite complex, and this is one of those series that, to be truly understood and appreciated for the masterpiece it is, needs to be read in order. But that said, One for the Wicked is an engaging story filled with twists and turns and characters who, no matter their role, are compelling people who drive this story, start to finish. It’s edgy, exciting, intriguing, complex, romantic, passionate… it’s a truly brilliant finale to the series.

My thanks to Avon Books and Edelweiss for providing me with a copy of this story in exchange for an honest review.

Posted by Blithely Bookish at 6:45 PM