Rescued by a Stranger by Lizbeth Selvig - On Sale Now! 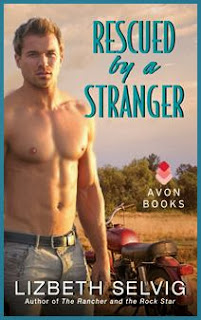 Avon Impulse author Lizbeth Selvig is releasing the fabulous follow-up to her much-loved debut novel, The Rancher and the Rockstar, and we couldn’t be more excited about it. With the forthcoming Rescued by a Stranger, Lizbeth has taken all the spirit, soul, and emotion that made fans love her first contemporary romance, and she’s added in a sexy Southern bad boy, along with an actual stable of adorable horses. That’s a winning (whinnying?) combination by our standards! This heartfelt e-original novel goes on sale from Avon Impulse wherever e-books are sold on 10/1/2013. If you’re interested in reviewing Rescued by a Stranger follow this link, and please feel free to contact me with any further questions.

She’s a woman full of dreams
When a stranger arrives in town on a vintage motorcycle, Jill Carpenter has no idea her life is about to change forever. She never expected her own personal knight in shining armor would be an incredibly charming and handsome southern man-but one with a deep secret.

He’s a man hoping to outrun a tragedy
It’s not every day the perfect woman literally falls into your arms…but that’s exactly what happened to Chase Preston when he got on his motorcycle and tried riding away from his troubled past. Chase is a wounded man though, and he know that despite the crazy attraction he feels for the sweet and beautiful Jill, he’s the worst person in the world for her.

Falling in love may require more than either can give
Something about Kennison Falls—and about beautiful Jill—is keeping Chase from leaving…but as Chase and Jill grow closer, Chase’s big secret is looming over them. Will truth tear them apart when Jill’s dreams start coming true and Chase’s past finally returns to haunt him? Or, can they get beyond dreams to find the love that will rescue their two hearts?

Lizbeth Selvig lives in Minnesota with her best friend (aka her husband) and a hyperactive border collie. After working as a newspaper journalist and magazine editor, and raising an equine veterinarian daughter and a talented musician son, Lizbeth entered Romance Writers of America’s Golden Heart® contest in 2010 and won the Single Title Contemporary category. That book, The Rancher and the Rock Star, became her debut novel with Avon Impulse. In her spare time, she loves to hike, quilt, read, horseback ride, and play with her four-legged grandchildren, of which there are nearly twenty, including a wallaby, an alpaca, a donkey, a pig, two sugar gliders, and many dogs, cats and horses. She loves connecting with readers! Find her on Facebook, Twitter, and at www.lizbethselvig.com.