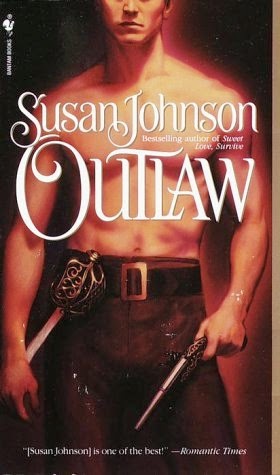 When her enemy, the infamous Laird of Ravensby, abducts her in order to win his brother's freedom from an English dungeon, Elizabeth Graham finds herself strangely attracted to this notorious privateer.
*****


Intriguing, romantic, and burns up the pages sexy!

I love it when an author can write a story that stays true to historical detail, but does it in a way that brings the characters to life, making me care about them and whatever course they’re on. Such is the case with Outlaw, the first of two books in Susan Johnson’s Carre series.

With relations between Scotland and England reaching a boiling point, the last thing Johnnie Carre, Laird of Ravensby needs is the current complication of his brother’s kidnapping. His plan for a swift resolution is to do what any self respecting Laird would do; abduct Elizabeth Graham, the daughter of the man who holds his brother hostage, and keep her until his brother is returned. The only fly in the ointment of his plan is his uncharacteristic, uncontrollable attraction to his beautiful captive.

Notorious ladies’ man, Johnnie Carre, Laird of Ravensby… boy, I didn’t care for him much in the beginning. Arrogant, manipulative, unrepentant man-whore… I really, really didn’t like him. But when he finally pulled his head out of his very fine, trews covered backside and realized what he was doing, what he was about to lose, that’s when I came to adore him!

Elizabeth Graham is a strong, independent woman determined to make her own way in life, and thanks to a very tidy sum settled on her at her husband’s death, she’s well on her way. It also took a while for Elizabeth to win me over, but when she did it was because of her love and unwavering devotion to Johnnie.

I really can’t share much of the story without giving away too many of the twists and turns that make this such an exciting, fast paced, couldn't-put-it-down read, but I can tell you this; If you love the attention to historical details and accuracy found in Kathleen Givens’ and Pamela Clare’s historical romances - along with an extra helping of steam - you’re sure to enjoy this sexy story of political maneuvering, kidnapping, torture, privateering, espionage, and sword-fighting, with a hard fought and well deserved happily after after.

My sincerest thank you to Susan Johnson for providing a copy of this story in exchange for an honest review! I'm looking forward to reading more!

Posted by Blithely Bookish at 2:21 PM