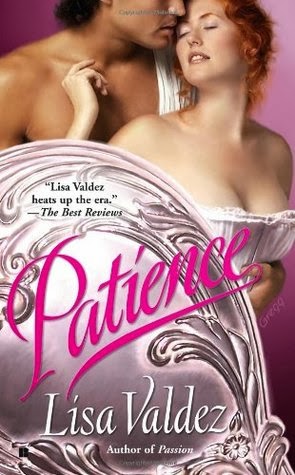 A desire that would put her name—and love—to the test.

Known for her exceptional beauty, Patience Emmalina Dare has been pursued by admirers ever since coming of age. But as suitor after suitor fails to inspire her love, or her desire, she is certain she will never find a man who touches her deeply. Until a passionate kiss with an enigmatic man awakens a powerful need in her. But can she reconcile her desire for him with her desire for a life that's her own? And what will she do when he shows her a part of herself she never knew existed?

When the secret of his illegitimate birth pushes Matthew Morgan Hawkmore from his place in society, the darkly handsome half-brother of the Earl of Langley plots his resurrection and his revenge. Betrayed and abandoned by the women he believed loved him, he swears never again to be controlled by love. But despite his vow, he is unable to resist Patience, whose strength and self-reliance mask a need that he is perfectly suited to fulfull.

Those of you who have read Passion know that most people either loved it or hated it, and the same holds true for Patience. I fall into the “love it” camp and will not apologize nor feel ashamed for doing so. The language and sexuality are just as raw and edgy in Patience as they were in Passion, so if you were hoping for a tamer book, you’ll be disappointed. I, however, loved it!

Wow! I loved this story!

Matthew is much different from the happy go lucky, carefree man he was in the last book, and who wouldn’t be? He’s learned that his entire life was based on a lie. “Friends” are nowhere to be found, business associates have not only abandoned him, but some are out to destroy him, not only financially, but totally and utterly destroy him, the man. He’s got a lot to deal with, to say the least, and all because his mother couldn’t keep her legs together. Thankfully, we don’t have to deal with her sorry ass in this book.

Patience has quite the story of her own to tell, one that we were not even given a clue to in Passion. Early on I had decided she was weak, needing to be told what to do, handled, etc. Wow, was I wrong. By the end of the book I had shed more than a few tears for her anguish, loss and loneliness. I came to see her as an incredibly strong woman who had to deal with all that life threw at her, and do it all on her own. I admire her greatly.

Again, Lisa Valdez gave us a story about two people who would have probably spent their entire lives alone had they not found each other. I love how they fit so well together, how they complement one another. Matthew and Patience are both amazing characters, fully developed people whom I became totally invested in. We also get to revisit a few of the earlier players. Aunt Matty, Mark, Passion and Prim all make appearances, just to name a few. And, if I’m correct, we meet Prim’s happily ever after in this book!

The sexual theme in Passion was “take me, open for me…” and the theme for Patience is “submit.” In their first scene together, Patience is given a small glimpse into what life with Matthew would be like. It was a hot scene, and I enjoyed it, but after they had been together a few times, I became worried that this book would cross boundaries I wasn’t ready to cross. While it did stretch the limits of my comfort zone, I can’t say that I found any part of it repulsive nor did anything really make me cringe—well, maybe I cringed a little bit—but it is my comfort zone we’re talking about and I know that by many standards, Patience is very tame.

Let me see if I can better explain what I mean without giving away details. A year or so ago, I read a book where the female lead went looking for this particular male who was a known DOM. He had quite the reputation and she wanted only the best for her experimental journey into submission. Anyway, one evening she failed to follow an order he gave her and she shows up naked at a dinner party he was giving. Her punishment was that for the entire evening she had to stay at his side, naked, on hands and knees, never allowed to sit down or stand up. When he was seated, she had to kneel at his feet, or lay curled up like a dog. At one point she was placed in the middle of the room, on hands and knees, where everyone watched while one man spanked her as she was giving another man a blow job.

Patience is like a kid’s fairytale compared to that.

However, it will still make some people uncomfortable and I totally get that which is why I’m trying to give as much warning as I can without giving away details. It's important to note that Matthew’s sexuality is what it is not because of what happened with his mother, but he states that it’s always been a part of him. He's not cruel or abusive and at no time is Patience forced to do something she doesn't want to. She can say ‘no’ at any time, which is part of why the story didn’t turn me off early on. I knew that she was ok with the entire arrangement and that Matthew cared deeply for her, and nothing on his part was done out of anger.

The story, while a continuation of the mess that was revealed in Passion, actually didn’t dwell too much on it. It was more about how Matthew was trying to stay afloat in a world where being a bastard was almost, if not as bad, as being a thief, a whore or a murderer. With Patience’s gentle ways and guidance, and her unconditional love, Matthew learns what it really means to be a rich man—and it has nothing to do with monetary wealth. The question that had to be answered was, could he set aside his bitterness and all of his plans for revenge in order to be worthy of being the kind of man he knew Patience deserved.

This book is a little more emotionally and sexually intense than Passion. I found it hard to put down and like Mark and Passion did, Matthew and Patience have given me much to think about! I’m looking forward to visiting with them again soon in the next book.