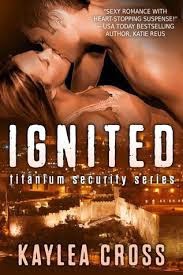 When her father is murdered by a Taliban cell in the tribal regions of Pakistan, Khalia Patterson reluctantly steps into his shoes to carry on the legacy of Fair Start Foundation, a non-profit group dedicated to furthering the education of girls. There she meets Hunter Phillips, the ex-SEAL and head of her Titanium security team, and quickly learns that coming to Pakistan might prove to be a deadly decision.

Battling demons of his own, Hunter grudgingly leads Khalia’s protective detail as a favor to his boss. From their first meeting it’s clear she’s going to be trouble, and that the cell that killed her father is hell bent on taking her out as well. Keeping her alive is one of the toughest assignments he’s ever faced, yet through one harrowing situation after another she continually impresses him with her strength and inner courage. Even though he fights his feelings for her, it’s a losing battle. And when the job is over, he doesn’t know how he’ll let her go.
**************

I thoroughly enjoyed Kaylea Cross's Bagram Special Ops series and was thrilled to see this first in her newest, Titanium Security, being reviewed (and loved) in droves! Being slow, as I often am, to jump on board 'the latest thang' train, and even knowing I'd get a great read, I've just now finally finished Ignited and am here to tell you, it ROCKS!

Kaylea Cross, in my opinion, takes Military Romantic Suspense to a level that no other author has taken it to - not that I've read, anyway. More often than not we're given just enough of the harsh, ugly reality of war to get our imaginations going but without pushing against the walls of our comfort zones. Ms. Cross takes her stories just a bit further and gives us more of the ugly, more of the harsh, more of the reality of war, and while I hate knowing what happens out there, I also appreciate knowing what happens out there.

Another thing I love about Ms. Cross's stories is that her characters are mature, dedicated, passionate people; heroes who are alpha and protective, but let their heroines shine, and heroines who are strong, capable, and never clueless. Both heroes and heroines can hold their own, but they're confident enough in themselves to let each other be who they are and hold their own own, when needs be.

And since so many others have written AMAZING reviews of this story, I'll stop here because I can't give you more than they already have.
Posted by Blithely Bookish at 9:43 AM