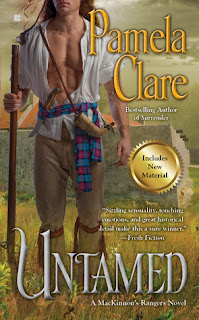 Blurb...
Charged with a crime they didn't commit, the MacKinnon brothers faced a death sentence until they agreed to serve the British Crown in the colonies and take up arms against the French. Allied with the Indian tribes who lived beside them in the wilderness, the Scottish Highland warriors forged a new breed of soldier...

Though forced to fight for the hated English, Morgan MacKinnon would no more betray the men he leads than slit his own throat—not even when captured by the French and threatened with an agonizing death by fire at the hands of their Abenaki allies. Only the look of innocent longing in the eyes of Amalie, a convent-bred French lass, could make him question his vow to escape and return to the Rangers. And soon the sweet passion he awakens in Amalie has him cursing the war that forced him to choose between upholding his honor and pledging himself to the woman he loves.
Keeping this short:

This is the 2nd installment of the MacKinnon's Rangers series and was every bit as good as the 1st, if not better! In this story loyalties are tested and we learn that not everything is as it seems.

In a way very few authors can do, Pamela Clare has given us characters who are so much more than fictional. Morgan and Amalie are living, breathing people I care about, and the story-line is, once again, unique to the "Highlander" genre.

Without a doubt, start to finish, Untamed is a fast paced, funny and sexy read! I've said it before and I'll say it again... Pamela Clare writes some of the best stories out there and if you haven't yet given her a try, you're missing out on great times!