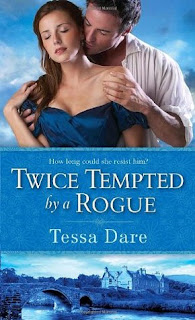 The daring members of the Stud Club are reckless gamblers and no strangers to risk--until love raises the stakes in Twice Tempted by a Rogue.

Luck is a double-edged sword for brooding war hero Rhys St. Maur. His death wish went unanswered on the battlefield, while fate allowed the murder of his good friend in the elite gentlemen's society known as the Stud Club. Out of options, Rhys returns to his ancestral home on the moors of Devonshire, expecting anything but a chance at redemption in the arms of a beautiful innkeeper who dares him to take on the demons of his past--and the sweet temptation of a woman's love.

Meredith Maddox believes in hard work, not fate, and romance isn't part of her plan. But when Rhys returns, battle-scarred, world-weary, and more dangerously attractive than ever, the lovely widow is torn between determination and desire. As a deep mystery and dangerous smugglers threaten much more than their passionate reckoning, Meredith discovers that she must trust everything to a wager her heart placed long ago.
The second installment of the Stud Club Trilogy almost didn’t feel like part of the series at all due in part to the fact that we really hadn’t gotten to know Rhys St. Maur very well at all in One Dance With A Duke, so in this book he seemed to me to be a totally new character. In addition to that, the continuing storyline revolving around Leo’s death didn’t really come into play until the latter part of the book. I didn’t mind any of this because Rhys’ and Meredith’s story was strong enough to stand on its own merit and kept me interested from start to finish.

Meredith is, unfortunately for me, my least favorite type of historical romance heroine. She was annoyingly independent and bossy. She basically ran the whole village and that just didn’t set well with me…however, that’s my problem and no reflection on the story or the author’s writing… it was just who she was. But as the story progressed and I learned more about her background, I began to understand her better and could see that her “in charge” attitude was more of necessity than just a desire to be the boss.

Rhys St. Maur, on the other hand, is my favorite kind of hero – scarred both physically and emotionally. Eleven years spend in the service of the Crown can really take its toll on a man and it surely did on Rhys. When he finally decided to return to his ancestral home, Buckleigh-in-the-Moor in Devonshire, to face the demons of his past and take up the responsibilities he’d ignored for all those years, he did so knowing that he wouldn’t be very popular and likely not welcomed at all. He was right. But he had no intention of allowing the less than warm welcome to dissuade him from what he knew he had to do. He was a man who’d faced and defeated death over and over, despite his best efforts to the contrary. So, if he had to live, he’d decided he’d go home and do what he could to right the wrongs done by his family.

It was quite an interesting twist to watch Meredith and Rhys butt heads when it came to marriage – he wanted to marry her, she just wanted sex. Smart man, Rhys – he held out for marriage! Well… he held out for a good long time, anyway!

Now, I can’t tell you how excited I was to finally read a book where the “deep, dark secret” really was deep and dark and worthy of a tormented character. All too often authors fail their readers by writing characters whose brooding nature and sexual intensity are due to some horrific event or events in their past. We become invested in these characters as people and forgive their brutish and oft times uncivilized behavior because we know they had it rough and need to be loved until they are all better – well, that is until we actually learn what said “deep, dark secret” is, only to become really miffed because it doesn’t fit the circumstances at all. I mean, these men are really, really messed up! I expect to find out that whatever screwed them up is really, really bad and not just that they didn’t get the black pony they wanted for Christmas when they were 12, and we’re expected to believe that’s why they’re dark and brooding! This is not the case with Twice Tempted by a Rogue, and in fact, both Rhys and Meredith have “deep, dark secrets” that, in my humble opinion, vindicate them both from their intolerable behaviors and even made me more understanding of Meredith’s desire to single handedly save the entire village. What surprised me was that her secret was every bit as compelling as Rhys’ and made her refusal to marry him understandable. I loved how the author created a “blame” that was powerful enough to make their guilt and self deprecation believable. Brilliant storytelling, that!

I enjoyed this story very much and was truly surprised by the revelation that leads us into the third and final book, Three Nights with a Scoundrel. I’m truly looking forward reading more by Tessa Dare.

Click here to purchase Twice Tempted by a Rogue at Amazon