Writing and Civilization: From Ancient Worlds to Modernity by Marc Zender 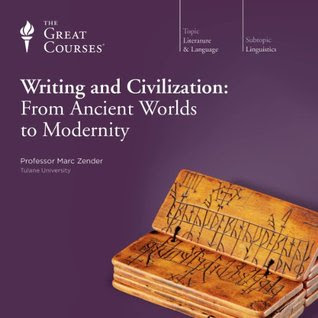 At just over 5,000 years old, writing is actually a relatively recent invention. It has become so central to the way we communicate and live, however, that it often seems as if writing has always existed.

But the question remains: Who invented writing, and why?

In these 24 fascinating lectures, you'll trace the remarkable saga of the invention and evolution of "visible speech," from its earliest origins to its future in the digital age. Your guide is an accomplished professor and epigrapher who whisks you around the globe to explore how an array of sophisticated writing systems developed, then were adopted and adapted by surrounding cultures.

Along the way, you'll visit the great early civilizations of Egypt, Mesopotamia, China, Japan, and the Americas, and you'll see how deciphering ancient scripts is a little like cracking secret codes - only far more difficult.

You'll be spellbound as you hear accounts of the breathtaking moments when the decipherment of ancient scripts broke centuries of silence. And you'll marvel at fascinating objects once shrouded in mystery, including the iconic Rosetta stone.

Writing and Civilization offers the chance to not only discover the history of ancient writing systems, but also the rare opportunity to actually hear those scripts read aloud and to learn the meaning of their messages hidden in plain sight.
I enjoy listening to Audible's The Great Courses series of books. This one started out slow... lot's of background information... but the narrator is excellent and at the 30% mark, I was hooked!

There are so many interesting facts and so much information about how languages and writing styles came and went, and I would have enjoyed this much more if there had been lecture handouts with graphs and images, but still all in all a great course/lecture.

The one thing that shocked me was learning that The Common Core State Standards for English Language Arts & Literacy proposed in 2009, and now adopted by 45 of the United States, does not mandate cursive instruction. Only keyboarding is required.

So, what happens when/if there's a time, generations from now, when something happens - like a solar flare - that shuts down electrical grids and there are no keyboards to type on? How will people communicate? Also, think about what that means. Cursive is a dying art form, and someday your grand-kids will be asking you to show them what writing looks like.

Purchase Writing and Civilization at Amazon