A Sword for His Lady (Courtly Love #1) by Mary Wine 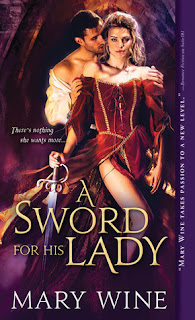 After proving himself on the field of battle, Ramon de Segrave is appointed to the Council of Barons by Richard the Lionheart. But instead of taking his most formidable warrior on his latest Crusade, the king assigns Ramon an even more dangerous task—woo and win the Lady of Thistle Keep.

If only she'd yield her heart...

Isabel of Camoys is a capable widow with no intention of surrendering her valuable estate. She's fought long and hard for her independence, and if the price is loneliness, then so be it. She will not yield... even if she does find the powerful knight's heated embrace impossible to ignore.

But when her land is threatened, Isabel reluctantly agrees to allow Ramon and his army to defend the keep—knowing that the price may very well be her heart.

Mary Wine has long been one of my favorite historical romance authors. It's hard to put into words why that is, other than to say she just brings a little something extra to her stories. More detail, but not so much that it's boring. The characters feel right, like they truly do belong in the time she's placed them. These are the things that make her standout as one of the best in the genre, and why I always look forward to her books.

Even though this story isn't completely unique, Ms. Wine created characters who more than make up for it. I thoroughly enjoyed reading about the strong, feisty, determined Isabel! She's been widowed long enough to know she doesn't need a husband to make sure the people and the lands are prosperous. But when King Richard heads off to the Crusades again and tasks his Baron, Ramon de Segrave with marrying Isabel so that her lands will be protected, she finds herself torn between what her mind tells her she needs, and what her body won't be denied.

Ramon is stubborn, arrogant, and determined to marry Isabel, as his King demands. But before long he finds himself in a battle of wits and wills with one of the most formidable opponents he's ever faced! And it's a woman!

This really is an entertaining story. There's humor, intrigue, danger...and plenty of passion. I'm excited to read more in the Courtly Love series, especially Ambrose's story. I'm looking forward to Ramon giving him a taste of his own taunting when he meets the woman who will be his match!

Click here to purchase A Sword for His Lady from Amazon