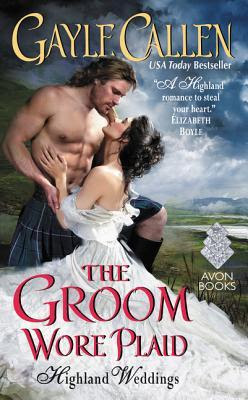 Maggie McCallum's dreams about her new fiancé aren't the romantic sort. It's not just that she was bartered to Owen Duff like a piece of property to end a clan feud. She's also haunted by premonitions of his death on their upcoming wedding day. Yet the exasperating Highlander won't let her call it off, even though his life and his clan are both in jeopardy.

Owen has wanted Maggie in his bed since he first glimpsed her years ago. If their union restores peace between their clans, so much the better. But while lusting after another chief's sister had its risks, growing to trust Maggie is far more dangerous. Owen is falling deeply in love with the one woman he cannot hope to claim . . . and survive.

This is the 2nd installment in Gayle Callen’s Highland Weddings series. Like the 1st book, The Wrong Bride, The Groom Wore Plaid is a fun story. The witty banter between Maggie and Owen made me chuckle more than a few times. Their passion - though it didn’t happen until later in the story, made this a steamy read! There’s also a mystery, a little poignancy, and overall The Groom Wore Plaid is an entertaining tale and a great addition to the series.

There are definitely characters I’d like to know more about, and I’m looking forward to what Ms. Callen offers up next in the series.

An ARC was provided by Avon Books. In appreciation I’m giving them an honest review.