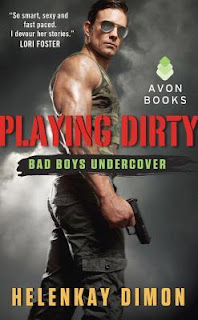 As an elite Alliance agent—the joint undercover operation of MI6, the British Secret Intelligence Service, and the CIA—Ford Decker lives for the adrenaline. But when he befriends sexy property manager Shay Alexander in hopes of finding her cousin, a known national security threat, Ford crosses the line, getting to know her better . . . in bed.

After being burned by her last relationship, Shay wants to take things slow. Yet she can't keep her hands off the drop-dead gorgeous hottie who's moved into her apartment building. So when Ford's identity as an undercover agent is exposed, his betrayal cuts deep. Shay never wants to see him again, but Ford can't let her go, not when her life is still in danger. He will sacrifice everything to protect her, then be prepared to walk away from the only woman he's ever loved, even if it breaks him.


Terrorists and traitors and spies, oh my!

Ford and Shay are great characters, both with pasts they can’t seem to leave there – in the past. They’re attracted to each other and their sexual chemistry is off the charts, but they just can’t seem to … trust or open their hearts to one another. I suppose that makes sense on Ford’s part given that Shay is an unwitting player in his mission to find a potentially deadly ‘terrorist’, not someone he should be falling in love with.

I truly enjoyed Playing Dirty. The world Ms. Dimon has created is more than a little exciting and definitely intriguing. Then, add-in the amazing cast and this is a series not to be missed!