The Sinner by Margaret Mallory 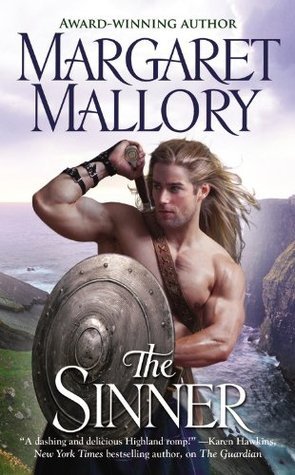 The Sinner is the second book in Margaret Mallory’s Return of the Highlanders series. Set in 16th century Scotland, the turmoil of clan feuding, alliances by marriage and political unrest of the times makes this an exciting, funny, and sexy story.

Alex MacDonald is the Highland’s version of a rake, and proudly so, because if there was one thing he had learned from his parent’s marriage is was to avoid one of his own at all cost. He sees nothing wrong with taking many a lass to his bed because, as his father told him, “men like us needed women like we need the sea—and that one woman would never do for us.” But as often happens to these blissfully bedded men, it’s become apparent that he may have no choice when it comes to matrimony. The only problem is, the woman he’s set his sights on, Glynis McNeil, wants no part of Alex or marriage.

Glynis escaped one abusive husband and isn’t about to give marriage a second try, regardless of how much a good union would benefit her clan. Her reputation as an untamable, knife wielding woman has embarrassed her family, and she knows she should marry again, if for no other reason than to remove some of the shame, but she just can’t do it. Not even the handsome, charming, verra sexy Alex MacDonald can tempt her… Okay, okay, she’s tempted by him alright, but marriage has nothing to do with it!

I'll mention this for those who might be wondering; I have not read the first book in the series, The Guardian, but had no problem following this story whatsoever. It works very well as a stand alone novel, and that’s saying a lot coming from me, one who suffers from a chronic case of MR.BIOs – Must Read Books In Order syndrome.

The bottom line - The Sinner is a fast paced, entertaining tale that had me laughing, sighing and fanning myself. I love the historical elements used as a backdrop, the blending of fact and fiction. I've read a few book by Margaret Mallory and I've truly enjoyed each and every one because she knows how to write stories and characters I can’t help but love. I’m very much looking forward to reading more in this series.

This book was provided by netgalley.com in behalf of Forever, an Imprint of Grand Central Publishing.
Posted by Blithely Bookish at 11:20 AM