Time Out by Jill Shalvis 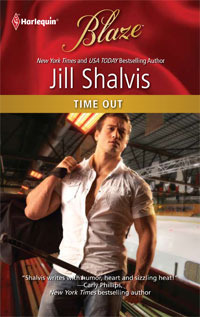 Coach Mark Diego is in the midst of a public relations nightmare when two of his NHL Mammoths team members are involved, on camera, in a brawl against two rival Anaheim Ducks team members. As penance, and hoping to show the teams in a better light, Mark and the other coach agree that the guilty parties will be required to spend their off season providing community service to areas in need. Mark chooses his burned out hometown of Santa Rey, California, where during the day his players will help construction crews rebuild homes devastated by wildfires, and they’ll spend their evenings and weekends coaching the community’s recreation center youth baseball team. And of course, just as he had expected, given the choice between community service or suspension, the Mammoths team members are on board the plan, too. But what he didn’t expect was his powerful attraction to the recreation center’s coordinator, Rainey Saunders.

Once upon a time, during her jailbait years, Rainey Saunders had a major crush on Mark Diego, her brother’s best friend. She crushed so hard, in fact, that in her attempt to get him to notice her as more than just a kid, she not only embarrassed herself, but in the end, ruined her’s and Mark’s friendship. It wasn’t that Mark was being a jerk, not at all - he was trying to avoid being a felon, and even though her mind knows it, her heart can’t get on board with it at all. She would have thought that the years and time apart would have lessened her humiliation, but when Mark shows up to do the volunteer work, and he’s reporting to her, the only thing more embarrassing than what happened all those years ago is how badly she still wants him, now.

Time Out is everything I’ve come to expect from Jill Shalvis, and then some! Romantic, funny, heartwarming, poignant… and holy hell!!! She more than provided the “blaze” in this Harlequin Blaze novel!

I fell, absolutely, unequivocally, madly, passionately in love with Mark Diego, not in spite of his flaws but because of them. He’s an amazing, honorable, sexy man and one of my favorite heroes, ever! Rainey Saunders is a strong, passionate, savvy, force to be reckoned with, the perfect woman to have by his side. Apart they are wonderful, together they are amazing!

The bottom line – I seem to say this a lot about stories by Jill Shalvis, but here goes again; Buy this book. Stop thinking about it and just do it. You won’t regret it.

This book was provided by netgalley.com in behalf of Harlequin Blaze, in exchange for an honest review.
Posted by Blithely Bookish at 11:44 PM