Glory in Death by J.D. Robb, Narrated by Susan Ericksen 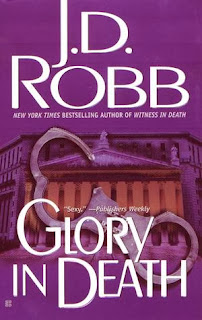 It is 2058, New York City. In a world where technology can reveal the darkest of secrets, there's only one place to hide a crime of passion-in the heart.

Even in the mid-twenty-first century, during a time when genetic testing usually weeds out any violent hereditary traits before they can take over, murder still happens. The first victim is found lying on a sidewalk in the rain. The second is murdered in her own apartment building. Police Lieutenant Eve Dallas has no problem finding connections between the two crimes. Both victims were beautiful and highly successful women. Their glamorous lives and loves were the talk of the city. And their intimate relations with men of great power and wealth provide Eve with a long list of suspects-including her own lover, Roarke

Glory in Death is the second book in J.D. Robb’s wildly popular, futuristic, In Death series, and just like the first book, it’s an exciting, gritty, thrilling read.

Two prominent women and a third ‘accidental’ have been found with their throats slashed, and as primary on the case, Police Lieutenant Eve Dallas has her hands full. With the list of suspects rising along with the death count, Eve is mentally and emotionally pushed to her limits, and so is her relationship with Roarke.

Honestly, even though I’ve listened to my daughter rave about these stories, and despite the number of 4 and 5 star reviews on Goodreads, I just never felt the urge to read this series. But thankfully I stumbled upon the audio version of Naked in Death at my public library and now I’m hooked!

Glory in Death is an intriguing murder mystery filled with twists and turns and suspects and probable causes… plenty of possibilities to keep me guessing – even though I had a fairly good idea, I wasn’t certain – as to the identity of the murderer. And the budding romance between Roarke and Eve is done so well that even though it’s frustrating at times, it’s also what I’d expect from these two, strong willed people.

The series is set in the future, mid 21st century. Since I’m not a fan of Science Fiction, I was worried about how well I’d like these books. Fortunately, while they’re futuristic, they’re not at all overly Science Fiction, and I think people who aren’t usually fans of the genre will enjoy these. In fact, if you're familiar with Stephenie Meyer's The Host, I'd say this series is even less SciFi than that.

Now, a bit about the audio. Susan Ericksen is just so, so talented! She gives these characters such distinctive voices that it’s as though she’s breathed life into them. She gives them the level of passion, fear, sorrow, hope... all the emotions become so much more vivid. They truly do start to feel like real people, and that’s exactly how I love my audio ‘reads.’

Overall, Glory in Death is fast paced, exciting, passionate, and even romantic in a two-steps-forward, one-step-back sort of way, and I loved every minute of it!

Posted by Blithely Bookish at 12:51 PM