The Wicked Deeds of Daniel Mackenzie by Jennifer Ashley 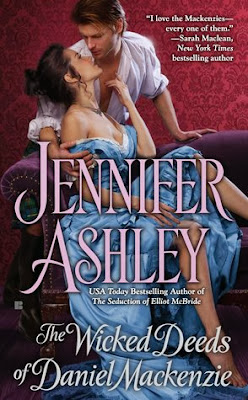 Second Sight And Seduction…
Daniel Mackenzie lives up to the reputation of the scandalous Mackenzie family—he has wealth, looks, and talent, and women love him. When he meets Violet Bastien—one of the most famous spiritual mediums in England—he immediately knows two things: that Miss Bastien is a fraud, and that he’s wildly attracted to her.
Violet knows she can’t really contact the other side, but she’s excellent at reading people. She discerns quickly that Daniel is intelligent and dangerous to her reputation, but she also finds him generous, handsome, and outrageously wicked. But spectres from Violet’s past threaten to destroy her, and she flees England, adopting yet another identity.
Daniel is determined to find the elusive Violet and pursue the passion he feels for her. And though Violet knows that her scandalous past will keep her from proper marriage, her attraction  to Daniel is irresistible. It’s not until Daniel is the only one she can turn to that he proves he believes in something more than cold facts. He believes in love.

The Wicked Deeds of Daniel Mackenzie is the sixth book in the incredibly popular Highland Pleasures series, AKA Those Sexy Mackenzies! This is, of course, Daniel’s story, one I’ve been waiting for for a very long time!

Well, our rambunctious Daniel is all grown up and just as eccentric and rakish as his Da and uncles were before true love settled them down. What I most enjoyed about this book was seeing an entirely new side to Daniel, a mature, focused side. We’ve slowly been learning that one of his passions is tinkering with gadgets and mechanical things, but here we find he’s grown into quite the inventor. He’s smart, clever, determined, and possesses that devil-may-care attitude towards life that seems to be an inherent part of being a Mackenzie.

Violet is one of the most unique heroines I’ve read in a very long time. I really enjoyed her and her exploits, but I have to admit, I'm not a fan of her mother’s. There were moments when it bothered me how much Vi wanted to cater to Celine’s whims, and though Violet isn't entirely bamboozled by dear old mum, she chooses the path of least resistance and avoids the fall out sure to come by not toeing the line. That said, while I didn't love their mother/daughter relationship, I did like some aspects of it, especially how it made Violet into a force to be reckoned with, a force able to give Daniel a run for his money!

Truthfully, I think Daniel and Vi are a match made in heaven! They’re both quirky and creative and because they’re of a like mind, they can share ideas, feed off one another, and make amazing things happen.

One issue I had, and it might just be a “me” thing, but I was annoyed by Ms. Ashley’s attempt to make smoking sensual. Having lost my mother-in-law to lung cancer, having my own mother so stricken with emphysema that she’s confined to a wheel chair, on oxygen, and having grown up in a home with two chain smoking parents, I find absolutely nothing sensual or attractive about the habit. Like I said, it might be a “me” thing, but references to it were made often, and I feel strongly enough about it that it diminished my overall enjoyment of the story.

I'm happy to report that once again Jennifer Ashley has given us a wonderful story! Our Daniel is the man we all knew he'd grow up to be, and in Vi he's met his match! I enjoyed visiting with all the Mackenzies, but I do wish we’d spent more quality time with them. I’m thrilled to know that Daniel’s book isn’t the last because I don’t know what I'd do if I didn't have the world of Clan Mackenzie to escape to.

Posted by Blithely Bookish at 10:08 PM