Playing For Keeps - A Neighbor From Hell Novel by R.L. Mathewson 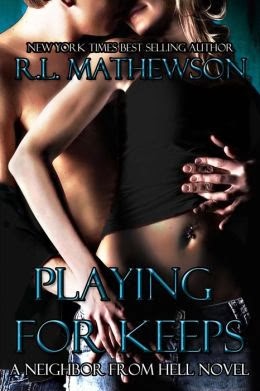 Done with being the world's biggest pushover, Haley decides that things are going to change starting with the aggravating neighbor who has too much charm and not enough restraint. What she didn't expect was to be sucked into his world, but Haley has a game plan and she won't let herself forget just what the bad boy next door is capable of.

The last thing Jason expected was for his little shy neighbor to go Rambo on him over some ruined flowers. After he decides to take her under his wing he can't help but notice that she fits very nicely in his life. Now the only thing left is to convince her that this is anything but a game.

I giggled, I snickered, and fanned myself throughout the entire story!

Playing for Keeps is the first book in R.L. Mathewson’s Neighbor from Hell series and one hell of a funny story.

I picked this up back in the days of Fictionwise and their 60% off sales but never got around to reading it because I wasn’t in the mood for a paranormal romance about demons living next door.

Man, oh man! I wish I had paid closer attention to what the book was about because I’ve been missing out on some seriously good times!!

Like I said, for some reason I thought this was, literally, a story about demon neighbors. Don't bother asking why, because I haven't a clue, but yeah, I assumed this was a PNR. And although Jason is definitely a neighbor from hell, it’s not the literal kind of hell. He’s just a pain in the ass. The kind of neighbor who has you thinking of selling your home, or burning his down. Prison time starts looking good if it means ridding the world of him and his annoying, loud, friends.

After realizing that this is not a PNR, I was anticipating a light fun read and yeah, I got that, but there’s something more about Playing for Keeps; a connection between myself and the characters I can't explain and wasn't expecting. At first I thought I’d feel nothing more than ‘meh’ for Jason, but by the end of the book I adored him! He and his family are just hysterical and I laughed out loud more than a few times at their banter. And the sex scenes? Holy hell hot!

This isn’t a deep or compelling novel, but it’s sexy, romantic, funny and thoroughly entertaining. Even as I sit here writing this review I’m grinning from ear to ear as I recall some of Haley and Jason’s antics, and those of Jason’s goofy friends.


Posted by Blithely Bookish at 5:28 PM