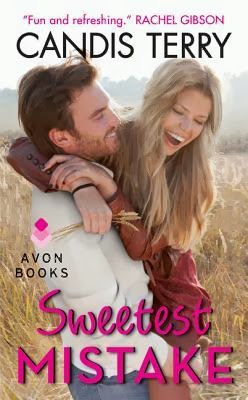 Made me laugh, made me cry, made me fall in love!

I just adore the Sweet, Texas series by Candis Terry! The stories are funny, sweet, romantic, and very sexy, and while they are light, Contemporary Romance reads, they’re not shallow. The stories are filled with life’s trials and triumphs, each poignant in its own unique way. And Sweetest Mistake even had me a bit teary eyed.


Firefighter and former Marine Jackson Wilder has tough guy down to an art, but he’s learned the hard way that promises were made to be broken. Abigail Morgan was once his best friend, his first kiss, his first love, his first everything. He’d just forgotten to mention all that to her and she blew out of his life. Five years later, she’s back and he’s battling a load of mistrust for her disappearing act. But for some reason he just can’t keep his lips—or his hands—to himself.

When her stint as a trophy wife abruptly ends, Abby returns home to Sweet, Texas, and comes face-to-face with Jackson—her biggest and sexiest mistake. Time and distance did nothing to squash her love for the act-first-think-later stubborn hunk of a man, and when he suggests they renew their old just-friends vow, Abby realizes she wants more. She’d cut and run once. Could she do it again? Or could she tempt him enough to break his promise?

Candis Terry really knows how to tell a story that draws me in and captures my heart, first page to the last. In Sweetest Mistake I found myself running a wide range of emotions – hurt, frustration, sorrow, anger – but the whole time I was filled with hope that these two amazing people would be able to look past the past, and stop letting the fear of “what if” ruin their future. It’s not that I didn’t understand where they were coming from, because I totally did. But sometimes you have to take a chance… just one more chance… because the payoff, as it was for Jackson and Abby, is worth the risk.

If you’re a fan of small town romances with awesome heroes and heroines, an amazing supporting cast, lot’s of steam and beautiful happily ever afters, then you need to pay a visit to Sweet, Texas. You may just decide you never want to leave!

My thanks to Avon Books for providing me with a copy of Sweetest Mistake. No mistake about it, I loved every minute I spent reading it!

Posted by Blithely Bookish at 11:43 AM