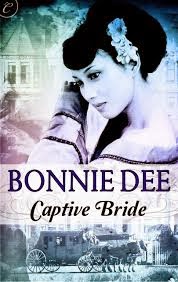 Huiann arrives in America expecting to be wed to a wealthy businessman. She no sooner disembarks from the ship than she realizes Xie is not looking for a bride: Huiann is worth more to him as a high-end prostitute. Though her fate is better than that of other Chinese women forced into the sex trade, she has no intention of waiting for Xie to sell her virginity to the highest bidder. At the first opportunity, she escapes and disappears into the city.

When a beautiful woman takes refuge in his store, Alan's life changes forever. He's spent the last five years trying to forget the horrors of war, and had almost given up hope of finding love. He hires Huiann as his housekeeper, and though they can only communicate through signs and sketches, they quickly form a bond that transcends the need for words.

But Xie is determined to recover his property, and love may not be enough to protect Huiann from his vengeance.

Bonnie Dee writes some impressive historical romances, if for no other reason than they are unique. She takes the same old storylines and gives them a twist which makes them distinctive and definitely interesting!

Captive Bride is another mail-order-bride-disaster story, but this time we have Chua Huiann who has come to America to marry Xie Fuhua, a successful Chinese businessman. Her parents hadn’t met the man, but through Lui Dai, one of Xie’s servants/agents, they were assured that their beloved, albeit unruly daughter, would have a life of prosperity and happiness. However, when Chua Huiann arrives in San Francisco she finds that things were not at all as they had been made out to be, and her life would be anything but happy.

Alan Sommers is the owner of a successful general store. He’s an honorable, hard working man who is running from the memories and nightmares that haunt him. Having fought in the Civil War and been taken prisoner early on, he spent years in captivity, not knowing whether he’d live or die, before he was finally released. Alan headed west to start a new life, but his nightmares followed him.

This story delves into the racism so prevalent during the time period, and the hardships Asian immigrants endured while trying to make a life for themselves. I don’t want to go into detail about how Huiann and Alan meet and spoil it for you, but I enjoyed watching their relationship grow into a sweet love story. Their cultural difference and the language barrier made for some fun and touching moments.

Overall, Captive Bride was another enjoyable, sweet and sexy read by Bonnie Dee, and I’m looking forward to more by this talented author.

This story was provided to me by netgalley.com in exchange for an honest review.

Posted by Blithely Bookish at 10:34 AM