Run to You by Rachel Gibson 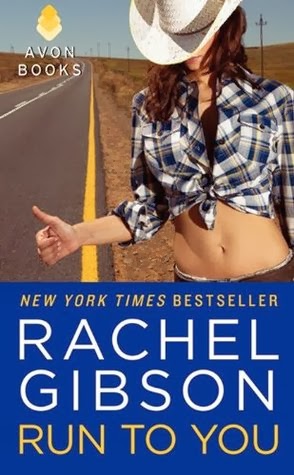 
There's nothing like fleeing Miami to ruin a girl's day. Stella Leon's bartending gig was going fine until gorgeous ex-Marine Beau Junger decked her mob-connected boss, spirited her out of the city, and claimed that Stella's half-sister--the one with the perfect life--sent him. Now Stella has no choice but to go along for the ride... and seduce Beau's military-issue socks off...

The Marine Corps was Beau's escape from his old man's legacy of naval heroism and serial philandering, but no amount of training could prepare him for the day he looked in the mirror and saw his father staring back. The answer: swear off meaningless sex. Oh, and find a way to make Stella Leon quit being so damn hot.

Run to You is the fourth book in Rachel Gibson’s Lovett, Texas series, and I find I’m becoming quite fond of her writing. It’s got that small town, down home feel, but the pace of this story is anything but slow.

I really enjoyed Run to You. For the record, I read it out of order and while I wasn’t lost at all, I do wish I had had the background stories so I could understand the players better.

Beau is a great hero, in more ways than one. He’s got that … charisma… that magnetism that draws people to him while, at the same time, warning them off. He’s had it tough growing up, but the Marine’s toughened him up and made him take a good long look in the mirror and realize he’s not the man he could be. In fact, he’s destined to be the very last man on the planet he would want to be – his own father.
Stella was fun, albeit at bit annoying at times. But to be fair, I tend to favor the heroes in my romance reads and get peeved at the heroines who don’t fall into line tout de suite. But that’s my problem and, in the end, I really did enjoy Stella’s spunky attitude and her relationship with Beau.

Rachel Gibson is a name I’ve seen around my friends’ reviews quite often, and I’m glad I finally gave her a try. I enjoyed the Lovett, Texas world she has created and look forward to reading more in the series!

My thanks to Avon Books for providing me with a copy of this ARC.