All for You (Coming Home #4) by Jessica Scott 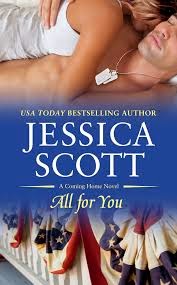 Can a battle-scarred warrior . . .

Stay sober. Get deployed. Lead his platoon. Those are the only things that matter to Sergeant First Class Reza Iaconelli. What he wants is for everyone to stay out of his way; what he gets is Captain Emily Lindberg telling him how to deal with his men. Fort Hood's newest shrink is smart as a whip and sexy as hell. She's also full of questions—about the army, its soldiers, and the agony etched on Reza's body and soul.

Emily has devoted her life to giving soldiers the care they need—and deserve. Little does she know that means facing down the fierce wall of muscle that is Sergeant Iaconelli like it's just another day at the office. When Reza agrees to help her understand what makes a soldier tick, she's thrilled. Too bad it doesn't help her unravel the sexy warrior in front of her who stokes her desire and touches a part of her she thought long dead. He's the man who thinks combat is the only escape from the demons that haunt him. The man who needs her most of all . . .

The thing I love most about Jessica Scott’s stories is the humanity of them. The behind the scenes graphic, candid look at how the survivors of war – and in this case I mean the soldiers – deal with their emotional and physical scars. And further testament to her ability to tell a tale is that she can show us all this without making statements of political correctness. Whether war is right or wrong, good or evil…

All For You is gut wrenching, heartbreaking, and gritty. It’s romantic, poignant and sexy. It’s thought provoking, uplifting and inspiring. It’s one helluva brilliant read.


An eARC was provided by Grand Central Publishing via Netgalley and in exchange I’m giving them an honest review.

Posted by Blithely Bookish at 8:37 AM