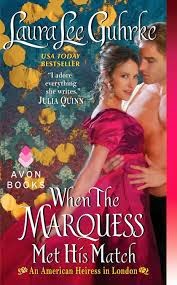 Nicholas Stirling, Marquess of Trubridge, loves his life just as it is: dissolute, scandalous, and deuced good fun. His father, the Duke of Landsdowne is not amused, and when he cuts off Nicholas’ trust fund, the fun-loving marquess is forced to find an alternate source of income—in other words, he has to marry an heiress.

Every new-money American heiress knows Lady Belinda Featherstone is the key to social acceptance. Once a new-money nobody herself, Belinda discovered first-hand how heartbreaking the game of love and matrimony could be after a reprobate British earl married her for her money. Now a respectable widow, Belinda has become England’s most successful matchmaker, guiding young American heiresses through the hazards of the London season and helping them to find husbands worthy of them. To her mind, the Marquess of Trubridge is nothing but a fortune-hunting scoundrel and she has no intention of allowing him to charm his way into any American girl’s heart, including her own.

When the Marquess Met His Match is the first story in Laura Lee Guhrke's An American Heiress in London series. It's fun, romantic, steamy, and a unique spin on historical romance's often told tales of the London marriage-mart.

I'm going to keep this review short: The Historical Romance genre is saturated with stories of the ton, seasons, debuts, dowries, and the quest to marry well, and this story is more of the same...but completely different! Despite some slow spots, not only did I enjoy the idea of the story, I enjoyed the way it was told. Ms. Guhrke has created a wonderful world and has given us characters to connect with and cheer for. When the Marquess Met His Match sets the stage for what I'm sure will be an entertaining series!

An eARC of this story was provided by Avon Books via Edelweiss, and in return I'm giving them an honest review.

Posted by Blithely Bookish at 7:48 AM