On a Highland Shore (Highland #1) by Kathleen Givens 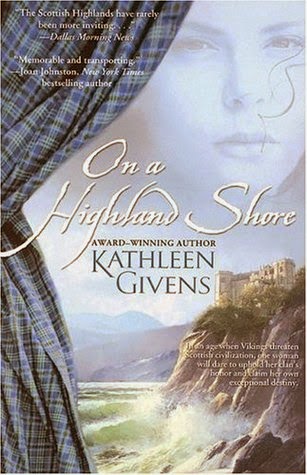 From acclaimed historical novelist Kathleen Givens comes a magnificently conceived, intricately detailed novel that brings to vivid life the tumult, adventure, and passion of thirteenth-century Scotland, when Norse invaders laid claim to the land and its people—and an explosive clash of cultures, politics, and personal pride changed the world forever.

On Scotland's western shore, the village of Somerstrath prepares for the joyous wedding celebration of Margaret MacDonald, the laird's daughter. But a dark storm of bloodshed and betrayal is closing in, as a merciless band of Vikings threatens the Highlands.

Margaret is determined to hold the MacDonald clan together and to locate her abducted younger brother. But can she trust the noblemen from King Alexander's court, who insist that only by adhering to a betrothal conceived for political gain will she find safety? Or should she put her trust in an imposing half-Irish, half-Norse warrior?

Gannon MacMagnus alone offers her hope of reuniting her family and vanquishing the barbarous Norsemen who would continue to rob her people of their God-given right to determine their own destinies. In whom should Margaret entrust the fate of the rugged, magnificent land she calls home?

*****
Minor plot spoilers - but nothing that will ruin the story for anyone.

The Biblio-gods must be smiling down on me because the last few books I’ve read have been “cannot put it down” fabulous. On A Highland Shore is no exception.

When you’re the laird’s daughter, what you want is not as important as what is best for your people. Margaret MacDonald learns this heartbreaking lesson the hard way, when she finds her future husband in the bed of her very best friend, Fiona, and is expected to marry him anyway. Refusing to listen to those around her, including her own parents, who tell her that “for the good of her people” she must marry Lachlan despite his “lack of judgment,” Margaret tries to find ways out of the betrothal without breaking her marriage contract and shaming her family. As it turns out, that is the least of her problems and she finds herself working to reunite her family, while helping overthrow a barbaric Norseman who has begun terrorizing Scotland. Of course she can’t do it alone and finds herself having to put aside her social and cultural biases, while learning to trust a man she barely knows, yet finds herself falling in love with.

This was my first read of Kathleen Givens’ writing and it won’t be my last. While On A Highland Shore is a romance novel, it is also so much more. Not your run of the mill fluffy historical romance novel – which I love as much as the next gal – it is a complex novel full of twists and turns, political maneuvering and treachery. I appreciate the detail Givens gave to historical accuracy, and at the end of the book she lists those events that were real and how she was able to weave them into her own story.

Using these actual historical figures and events to fill out this tale, Givens takes us to a time and place of great turmoil. Years of peace have left the Highlanders complacent, vulnerable and an easy target for one greedy and power hungry Norseman who has decided that the best things in life are his for the plundering. Who cares if a few lives – or a few thousand – are lost in the process? He’s just the kind of bad guy you love to hate and by the end of the story, as far as I was concerned, there was nothing brutal enough or too heinous that could have been done to him in the pursuit of punishment or revenge.

On A Highland Shore has a strong cast of characters, too many to name, but memorable all the same. In ways it reminded me of The Lord of The Rings in that everyone was willing to do their part no matter how difficult, trusting in their fellow men (and women) to also be doing their own parts as well. And because everyone did what they needed to do and trusted in each other, it all came together and worked out beautifully.

Kathleen Givens took what could have been mere words on a page and breathed life into them. The characters are wonderfully developed and are all people we care about. Margaret, the eldest daughter, is such a strong, opinionated woman yet so full of love and trust. I cried at the loss of her innocence, sharing the pain she felt upon learning of the betrayal. To see her so vulnerable and so hurt is heart wrenching. She loved and trusted both Lachlan and Fiona and could never have imagined what was going on right under her nose – then to learn her mother and others knew of it... I can’t imagine what she must have felt, another level of betrayal by her mother, the woman who was supposed to love and protect her and look out for her? I can't imagine how hurt she must have felt.

Though Margaret no longer wants the marriage, and knows it was for her own personal reasons – pride being one of them, she would never turn her back on her people. She understands the necessity of uniting clans for the betterment of all, but she isn't going to lie down and be Lachlan’s doormat, either. I was completely invested in her and cheered her on as she kept stating her case, exhausting every avenue available to her so as not to have to marry Lachlan.

Gannon MacMagnus is the perfect hero. Strong, compassionate, honorable and committed to aiding the Highlanders in rebuilding what they had lost and ridding them of the constant threat of more attacks, he was a force to be reckoned with. Having endured much loss in his own life, he well understood the emotional pain Margaret was going through and was one of the few people who knew how to help her.

Do you love a good battle, or two or three, mixed in with your romance? Then this is the story for you. The battle scenes were so well described that I could truly see, in my mind’s eye, the fighting as it played out. I could see the layout of the shore, the men defending the keep, the ruthless Vikings as they charged up the hill and the brave Highlanders who awaited them.

*sigh* Again I am rambling on.

While I wouldn’t compare this to War and Peace or The Lord of The Rings on the greatness scale, On A Highland Shore is an amazing tale of love, loss and the willingness to risk everything you have and everything you are in the fight for freedom and all you hold dear.