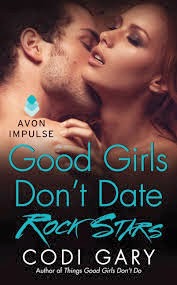 She also didn't count on running into her old flame—and her son's father-turned-country rock star—Travis Bowers, followed by a night of drunken dares. Apparently one of those involved a ring on her finger and a vow … neither of which she intends to keep. Now with a hangover from hell, this good-girl-gone-bad knows there's just one thing to do: run.

Travis has been all over the world, but Gemma has never been far from his thoughts. So when they had the chance to catch up over a few drinks, he didn't hesitate. Of course, he didn't expect it would lead to marriage, or a runaway bride! Travis finally has a second chance and doesn't plan on losing Gemma again—or the son he didn't know he had. He proposes, albeit belatedly, a date. Or rather, a few. If they can make this marriage work by starting over, he stays. If not …

Gemma's not interested; she's got a son to protect and a heart to heal. But having Travis around could make both a little easier. Still, good girls don't date rock stars . . . right?

Good Girls Don’t Date Rock Stars is the second book in Codi Gary’s Rock Canyon series. I absolutely loved the first book, Things Good Girls Don’t Do, and was anxiously awaiting this book. Sadly, even though I love the way Ms. Gary tells a story, this time, I didn’t love the story she was telling.

As I said, Codi Gary wrote an awesome first installment and I couldn’t wait to read more of the Rock Canyon world, but there were major things about Good Girls Don’t Date Rock Stars that didn’t work for me, and I actually considered not finishing it.

To help explain my thoughts, I’m just going to break it down by 'what worked' and 'what didn't.'

The first and most glaring problem for me is the title, and something everyone needs to be aware of. This story isn't about a bad-boy rock star, it's about a very awesome, not at all bad boy country music star. In fact, he's so awesome, he's the kind of guy most any parent would love to see their daughter hook up with. I know I would!

Next, as with infidelity, keeping a child from its biological mother/father is a story line that has to be handled with finesse if the author hopes the parent doing the concealing (or the partner doing the cheating) has a snowball's chance in hell of becoming a character the readers will love. Granted, Gemma and Travis are young when their child is conceived, but it speaks volumes to Gemma’s maturity – or lack thereof – that in ten years time she never contacted Travis to give him the chance - his right - to make his own decision about whether or not he wants to be part of his child’s life. And her reasons aren’t even compelling. No deep dark secret or tragic past making her want to protect her child, nothing in Travis’ past to indicate he’d be abusive or just not care. Yes, she was young and immature as a teen ager, but she's just plain selfish as an adult, and I couldn't get past that.

And lastly, Travis had the potential to be an amazing character, but he never became more than just that – a character. I didn’t connect with him, didn’t feel his pain or his frustration at Gemma keeping something this huge from him. Yes, when he found out the truth there was the expected shock, the ‘I need time to process this…’ reaction, but he quickly moved on from that. Too quickly. In fact, I think I had a more visceral reaction to Gemma’s deception than Travis did!

Everything else. Codi Gary is a great storyteller, make no mistake. I adore – and I do mean adore - the supporting cast. Gracie is one hell of a best friend and I’m looking forward to reading her story.

Books in which small kids are the foundation of the story aren't always easy to pull off, but Charlie is a sweet, fun, more-mature-than-his-mother boy, and I enjoyed his time on the pages. From the gossipy, nosy neighbors to the friends, acquaintances, and sexy law enforcements, there are actually many things to love about Good Girls Don’t Date Rock Stars.

I did love parts of this story, but the main story itself – not so much, which is why I gave the book only 3 stars. Had things been reversed, had the main story been strong and the other stuff weak, this would still have easily been 4-4.5 stars.

All that said, Rock Canyon continues to be a great world and, despite my disappointment with this book, I’m looking forward to reading more!

A copy of this story was generously provided by Avon Books, and in return I gave them an honest review.