The Viking's Sacrifice by Julia Knight 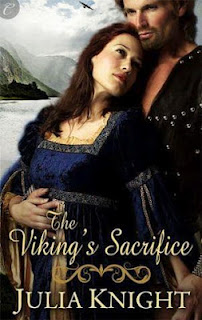 They know but unsurely who sit within, what manner of man is
come.~ Hávamál: 133

Julia Knight's The Viking’s Sacrifice is one of those stories that you don’t come across often, but will stay with you for a long time. It takes place during one of my favorite periods, pre-tenth century, with the Anglo-Saxon and Viking battles, the back and forth invasions, vying for riches, land and power. Part of what makes this time period so interesting to me is how the growth of Christianity changed the influence of pagan gods and the lives of those who worshiped them. But while I enjoyed the story for the historical aspect alone, I loved it because of Einar and Wilda, whose struggles for justice and freedom made The Viking’s Sacrifice an emotional read.


Viking raiders destroyed Wilda’s home. She witnessed the murder of her mother and would have been killed herself if it weren’t for the Viking boy Einar, who saved her from his ruthless brother. The blood and murder left Wilda cold and shorn of feeling.

Eight years later, the heathens return for Wilda. As a captive in the Viking village, she finds protection and silent comfort in the man who once gallantly saved her.

Einar has been cursed to silence by his brother. With the dark net of his brother’s power cast over their village, silence is a small price to pay for his family’s safety. But Einar is immediately drawn to Wilda, and the need to protect her from his brother awakens his Viking courage. Can Einar break his brother’s curse in time to save the village and the woman he loves?

Each chapter begins with a passage from either the Bible or the Hávamál - Words of Odin, the High One - and gives us a glimpse into what’s to come. For some, those passages might seem a bit preachy, but remember that during this time, and this story specifically, "religion" of whatever kind is a huge part of their lives, and if you keep that in mind, you’ll understand that the passages are more insightful than preachy.

The bottom line: This is a hard book to review because it doesn’t fit snugly into a single genre. It’s historical fiction for sure, but also historical romance, historical romantic suspense, mild Christian fiction, pagan beliefs … but in the end, for me, the labels don’t matter. What does matter is that this is such a poignant story. Heartbreaking, yet inspiring, and much more than a romance, The Viking’s Sacrifice is a wonderful love story. Wilda and Einar had to fight, not just to live, but to love, and so their happily ever after is a truly beautiful thing.

My thanks to netgalley.com providing me with a copy of this ebook in behalf of Carina Press.
Posted by Blithely Bookish at 7:14 PM