The Shadows (Black Dagger Brotherhood #13) by J.R. Ward - Betrayed by a Breakfast Cereal 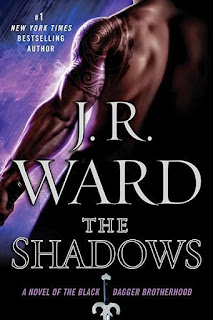 Trez “Latimer” doesn’t really exist. And not just because the identity was created so that a Shadow could function in the underbelly of the human world. Sold by his parents to the Queen of the S’Hsibe as a child, Trez escaped the Territory and has been a pimp and an enforcer in Caldwell, NY for years- all the while on the run from a destiny of sexual servitude. He’s never had anyone he could totally rely on... except for his brother, iAm.

iAm’s sole goal has always been to keep his brother from self-destructing- and he knows he’s failed. It’s not until the Chosen Serena enters Trez’s life that the male begins to turn things around... but by then it’s too late. The pledge to mate the Queen’s daughter comes due and there is nowhere to run, nowhere to hide, and no negotiating.

Trapped between his heart and a fate he never volunteered for, Trez must decide whether to endanger himself and others- or forever leave behind the female he’s in love with. But then an unimaginable tragedy strikes and changes everything. Staring out over an emotional abyss, Trez must find a reason to go on or risk losing himself and his soul forever. And iAm, in the name of brotherly love, is faced with making the ultimate sacrifice...

WARNING! This review is loaded with spoilers explaining why I feel angry and betrayed by this story. Stop here if you don't want to know, in detail, what happens to Trez and Selena.

No, I'm serious - there are a ton of spoilers here.

Still reading? You sure you want to do this?

Okay, but you were warned!

I have such incredibly mixed feelings about this book, and I’m not sure I’ll ever get them sorted out. Sometimes a story will gut me, and The Shadows did just that. In truth, I don’t remember a time I cried myself to sleep over a book – but I did this time. It was at moments laugh out loud funny, window fogging steamy, sweetly romantic, and profoundly tragic.

I always say that an author should write a story the way that story comes to him or her, and I stand by that. However, that doesn’t always mean I’ll like the story they felt compelled to tell. Well, the story as The WARDen felt compelled to tell it was done so brilliantly, but this is one of those times when I did not like the story itself. This is not how the Black Dagger Brotherhood series started out, and not since Phury and Cormia’s book have I felt so cheated out of a happily ever after!

The first 60ish% of the story was amazing. I loved every bit of it and had been thinking, “THIS is the way it should be! THIS is what made me fall in love with the Brotherhood so many years ago!!” Rhage’s one-liners, Lassiter’s eccentric, fallen self, V and Jane’s quickie in the clinic, and Manny and Rhage’s trip to Caldie, everything read like the original books and I was thrilled, and captivated, was falling in love with my Boys all over again! I was basking in all that Caldwell happiness… until it happened and I was devastated.

In a blog post explaining why things went the way they did (click here to read the full post), The WARDen said that if she tries to write a story any other way than the way her Rice Krispies give it to her, it shuts down. Goes blank. She either tells it the way it comes to her, or it can’t be told. I get where she's coming from, and honestly, as I kept reading late into the night because I needed a miracle… something to fix the unfixable, even as Trez was up on that pyre with the body of his beloved Selena, I waited. Needing something, anything to make this right. At the same time, I knew if she pulled a rabbit out of her hat and presto'd the happy ending for Trez and Selena, I would have been disappointed and still miffed that Wellsie died and Jane is now Ghost, MD.

On one hand, I gotta hand it to her; she stayed true to her Rice Krispies and made it real. On the other hand... it became painfully clear to me that when I'm reading to escape and waiting for - and expecting -the happily ever after that’s going to give me hope that true love exists and can overcome any obstacle… I don't want real. Real. Sucks!

And, if this truly is the way Trez and Selena’s HEA was 'meant' to play out, it should have played out in a different series, in a different world. A world where no one expects happily ever afters…A world where it's okay for an author to spit on romance.

In the real world things can be horrific and unfair and brutally tragic, which is why I read romance - I want to escape the reality that can be ugly when loved ones pass from our lives. This book is not true romance - not the kind I've come to look forward to from this author. Sure, iAm and the Princess got hooked up, but if that’s supposed to make me feel better, it's a failure of EPIC proportions! Their HEA sucked. They got the shaft in the happily ever after department and it in no way made up for or eased unforgivable debacle that was Trez and Selena’s story.

Am I ready to throw in the BDB Towel? Nope! Well, not yet anyway. I’m still too invested in the Brothers to turn my back now, but as I said, all bets are off. This book scared the hell out of me because the Black Dagger Brotherhood is no longer a series I can count on to make me forget the ugliness of the real world, if only for a little while. I will always be on guard, always wondering who will be offered up as a sacrifice to the all mighty Rice Krispies next.

And that is every bit as heartbreaking as Ward's desecration of Trez and Selena’s not-at-all happy happily ever after.