Seduced by the Gladiator by Lauren Hawkeye 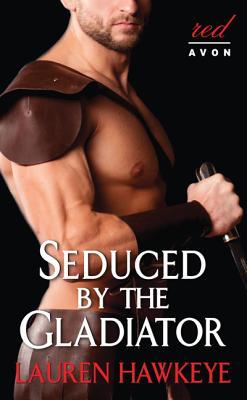 Fierce Lilia is the rarest of commodities: a female Gladiator.

Placed in the arena for entertainment and expected to perish, she has clawed her way to the top and is now the most feared woman in all of Rome. Taught to fight and kill without emotion, the last thing Lilia ever expected to feel was pleasure. Or love.

But when Christus, a warrior with his own demons to excise, is sold to the ludus that owns Lilia, she finds herself forced to fight to stay on top—and to stay out of his arms. Yet their blood-thirsty sport unleashes a passion that threatens to consume them both...and unmask them as lovers to the rest of the ludus.

When Gaius, the twisted brother of the emperor, reveals his challenge for the Gladiators: a battle to the death for the champions of Rome, Christus and Lilia must fight to win their freedom, their lives...and each other.

This was a pretty tough story to read, at times. The way slaves were treated, how humans had to fight one another to survive, just for the pleasure, the entertainment of the upper classes. Even now I’m shaking my head and the thought of it. If I didn’t know this was all true, I would think the author had a pretty twisted imagination!

I won’t recap the synopsis, but Seduced by the Gladiator gives us a glimpse into what life was like for slaves, Gladiators, merchants, rulers… the day to day kind of living, whether filthy and impoverished or extravagant. It’s a well written story, told in the first person from Lilia’s point of view. There was quite a bit happening right from the start, but the pace was slow due to the necessary world building and plot layout. It was all very interesting and the further along the story went, the more invested I became.

Lilia is a strong woman. Of course, she has to be. She’s the only female Gladiator and that makes her an icon for some, and a target for others. I had a hard time connecting with her at first because she’s so determined. So strong. So independent. But the more I read, the more I came to realize that in her world, to be otherwise would mean death. At this point, I not only came to care about her, but to respect her.

Christus is definitely a swoonworthy, tormented hero. He had had a good life, a wife and a child, and it had all been brutally taken away when they were slain by a neighbor who wanted Christus’s land. One thing leads to another and Christus is sold into slavery, and then, like Lilia, sold to this ludus to be trained as a Gladiator. Once he sees Lilia, the petite but fierce warrior, you can imagine how protective he became. Unfortunately, that wasn’t always a good thing, and led to more than a few problems between them.

As I said, the story started on the slow side, but once it picked up, it did so with a vengeance. The fight scenes were exciting and, when I allowed myself to think about why they were there, also heartbreaking.

You might have noticed that I capitalized the word Gladiator throughout my review. I did so out of respect for those real men and women who had no choice but to fight or die. 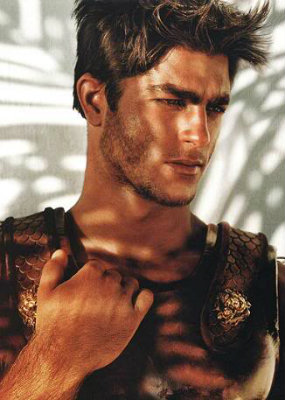 Christus
This is my vision of Christus, and when the author read my review she said I nailed it!

My thanks to Avon Books for providing me with a copy of this book in return for an honest review.
Posted by Blithely Bookish at 11:50 AM