Cold As Ice by Anne Stuart 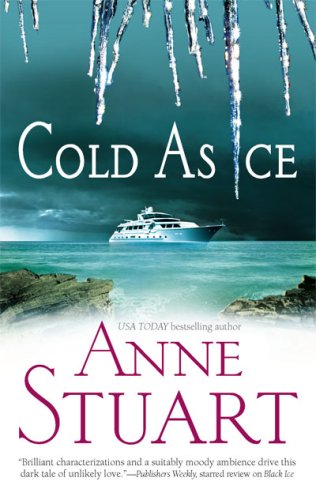 The job was supposed to be dead easy--hand-deliver some legal papers to billionaire philanthropist Harry Van Dorn's extravagant yacht, get his signature and be done. But Manhattan lawyer Genevieve Spenser soon realizes she's in the wrong place at the wrong time, and that the publicly benevolent playboy has a sick, vicious side. As he tries to make her his plaything for the evening, eager to use and abuse her until he discards her with the rest of his victims, Genevieve must keep her wits if she intends to survive the night. But there's someone else on the ship who knows the true depths of Van Dorn's evil.

Peter Jensen is far more than the unassuming personal assistant he pretends to be--he's a secret operative who will stop at nothing to ensure Harry's deadly Rule of Seven terror campaign dies with him. But Genevieve's presence has thrown a wrench into his plans, and now he must decide whether to risk his mission to keep her alive, or allow her to become collateral damage....

Cold As Ice is the second book in Anne Stuart's Ice series, and once again she gives us a hero who's arrogant, annoying, an ass without conscience or heart, too sexy to resist and, in a word, perfect! It's a fast paced story, one that, from the first page to the last, I couldn't put down.

I have to say, I'm a huge fan of hot, alpha males, but I wasn't sure I could get on-board with these hot gamma males, the kind that let nothing stop them from accomplishing their goal, even if it means offering up the heroine as a sacrifice to do so. But whatever it is about Anne Stuart's stories, I love these guys even as I'm hating them. I want them to die, even as I'm afraid they will. My emotions are always in a state of chaos while reading these books because the very things I do want to happen, I also don't want to see happen. See? Chaos!

I won't recap the book blurb, but I will say it's an exciting story. And pretty damned funny, too. There were times I was fanning myself, times I wanted to cry, but there were also times I was laughing and that humor caught me off guard, popping up when I was least expecting it. It helped lighten the mood of the story at times when it was needed, making the villain look like a fool and I loved that!

We met Peter Jensen in Black Ice and though we didn't see much of him, what little we were given had me wanting to get his story. Thankfully, I didn't have to wait long. As I said, he's arrogant. He's an ass. He's heartless, ruthless and annoying as all get out - and I adore him!

Genevieve Spenser is equally annoying in a mouthy sort of way, but if you were stuck with Peter for any length of time, you'd get mouthy, too! She's strong, independent, and a totally awesome woman!

So yeah, another terrific installment to the Ice series, and I am soooooo glad I decided to take these books from the shelf, dust 'em off and dig in!

4.5/5 stars because as with the first book, the ending is a bit abrupt.
Posted by Blithely Bookish at 1:18 PM