Sex and the Single Fireman by Jennifer Bernard 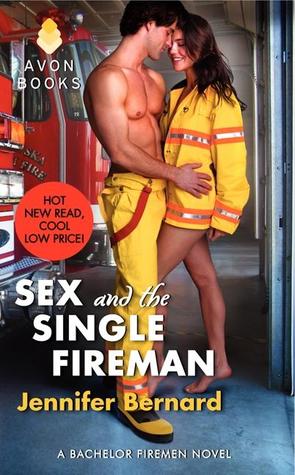 The toughest captain on the East Coast, single father Rick Roman has come thousands of miles to San Gabriel to put an end to the "Bachelor Firemen" media hype. But when a stunning woman he nearly hooked up with in Reno turns out to be a firefighter from his new station, Roman realizes it's going to be tough keeping the tabloids at bay.

But there's even more Sabina isn't telling him. Before dedicating her life to battling blazes, Sabina led a very different life, one that made her famous. The last thing she wants is to have her secret exposed. The papers, bloggers, and TV gossips will have a field day with that—especially when they sense the obvious sexual heat between Sabina and Chief Roman, who's torn between firing her...and falling in love with her!

Jennifer Bernard knows how to deliver sexy, romantic, emotional stories, and Sex and the Single Fireman, the third installment of the Bachelor Firemen of San Gabriel series is all that and more!
One of the things I most love about this author is how well she tells a story. They’re easy to read, yet compelling, and pull you in right from the start. Her characters are people we come to care about because even though they’re totally amazing, they’re also human. They're the kinds of people you live next door to, and they’re like the odd cousin that everyone wonders about. They’re the people you meet in the grocery story and the friends you wish you had… they’re people who draw you in and make you love them, every single time.

Sabina Jones is the “Bachelor” fireman in this book, and Chief Rick Roman is a man who’s trying to build a life for he and his son after losing his wife in the 9/11 attacks. That right there got my attention because we’ve all heard the tales of the real men and women who gave their all that day, and stories like this – stories of the ones left behind – never cease to touch me deeply. Whether it’s only mentioned briefly or the center of the story; whether it happened yesterday or eleven and a half years ago, it gets to me. Every single time.

Watching Sabina and Roman’s relationship grow from lust to love was heartwarming – and burn up the pages sexy. Start to finish, through the good and the bad, I couldn’t get enough of them and that thirteen year old Roman-in-training, Luke.

My thanks to Avon Books for providing me with a copy of this story in exchange for an honest review.
Posted by Blithely Bookish at 8:55 PM