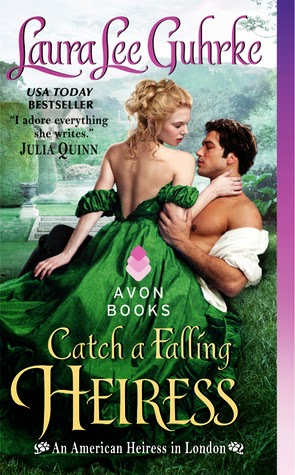 Catch a Falling Heiress is the 3rd book in Laura Lee Guhrke’s An American Heiress in London series. Historical Romance is probably my favorite genre, and it’s because of stories like this.

Linnet Holland wants nothing to do with fortune hunters. No, she’s determined to marry a man who loves her. But just as she’s about to accept the perfect marriage proposal from the man she wants, the rakish Earl of Featherstone interrupts and ruins everything, including her reputation, with his smoldering kiss.

Jack Featherstone knows all about Linnet’s “intended”, and he’s determined she won’t fall prey to that villain as other women have in the past. But when his attempt to save Linnet ruins her instead, he knows he has to make things right. So he sets out to win this golden beauty . . . and prove to her that being ruined by him was the best thing that could have happened to her.

I’ll say this right up front, Catch a Falling Heiress is my favorite book in this series, so far. It overlaps slightly with book 2, How to Lose a Duke in Ten Days, so it’s important to read these in order because we get the details on what actually happens to Van Hausen - the vile man with no conscience, no care for anyone but himself. Details… that’s what I wanted and that’s what I got in this book!

I fell madly in love with our hero, Jack, the second son of the Earl of Featherstone. He was not loved by his father and older brother - that I can tell, anyway - and he learned early on that he’d have to make his own way in life. His early years were rough, but with determination and great friends he became an amazing man whose story needed to be told.

Linnet … such a stubborn woman, but it seems to me that’s the way the “American Heiresses” are. They’re so very different from the usual London princesses, and that’s what makes these stories shine – well, that and the amazing heroes!

It’s so much fun watching these men of the ton try to understand (and woo) these women who are nothing like the simpering little chits they’ve been exposed to, and that - along with a great storyline - is what makes Catch a Falling Heiress so entertaining.

Laura Lee Guhrke’s historical romances are magic, and if you haven’t yet given her stories a read, you’re missing out! The An American Heiress in London series sits proudly on my “must read” shelf, and I can’t wait for the next installment!

An ARC of this story was provided by Avon Books. To show my appreciation I'm giving them an honest review.

Posted by Blithely Bookish at 10:18 AM