Rules of the Game (Stardust, Texas #2) by Lori Wilde 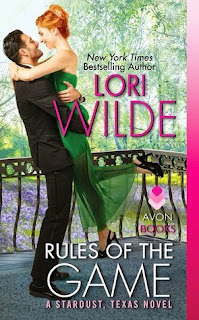 Rules of the Game is the second book in Lori Wilde's Stardust, Texas series. Honestly, she is one of the most talented authors when it comes to her small town contemporary romance stories, no doubt about it. I adore everything she's written, but this one... there was something extra special about Jake and Jodi!

Just uttering the word "wedding" makes Jodi Carlyle break out into a cold sweat. So a year after she'd been dumped at the altar, and two days after turning the big 3-0, she decides to break some rules—by dressing to the nines, hiring a limo,and crashing a swanky wedding...

...Where she catches the eye of the Dallas Gunslingers' new star hitter Jake Coronnado. He's hot. He's sexy. He sticks by her side all evening. He's the perfect fling. After a wild weekend, where they do everything and then some, Jodi thinks she'll never have to see him again...hey, she's even told him her name is Gwendolyn! But she thinks wrong.

I could go on and on about Jake and Jodi, and the quirky population of Stardust. They make me laugh, make me cry, they make me sigh...suffice it to say that Rules of the Game is another winner. As I said above, I adore Lori Wilde's stories, and can't wait to head back to Stardust, Texas one day soon!

An ARC was provided by Avon Books, and to show my appreciation I'm giving them an honest review!
Posted by Blithely Bookish at 7:50 PM