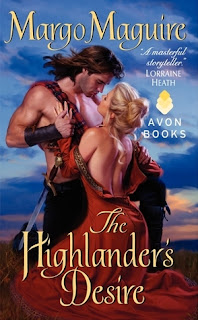 I enjoyed this Scottish Highlander romance. Lots of detail was given to the day-to-day running of a keep, and I enjoyed the passion between Anna and Lachann. Things moved a little slow from time to time, but still an entertaining story.

Despite this being the second book in the Highlander Brothers series, it reads verra well as a stand-alone!

Lachann MacMillan's watched his older brother, the laird of his clan, find a passionate marriage, but he suffers no illusions that his path will be the same--especially as the woman he loved was stolen from him years ago. He's ready to leave his homeland and make his mark. He'll even enter into a passionless marriage to the daughter of the Laird of Kilogorra if it means a chance at his own land…and leaving behind his painful memories. A simple enough plan until he meets Anna MacIver, a mere serving maid with the face of an angel who ignites a fire in him that is anything but angelic.

Anna has been a lowly servant in her uncle, the Laird of Kilogorra's home, since her mother died years ago. She has no envy for her cousin's matrimonial fate as observation of has taught her that freedom--no matter the serving chains--is far more precious that being under the command of a husband. But when Lachlann arrives to marry Anna's cousin, she finds herself longing for something she never knew she wanted. Together the maid and the highlander may find that some things are worth having, no matter the cost.

An ARC was provided by Avon Books.

Posted by Blithely Bookish at 6:58 AM