Agent of Desire by Charlie Evans 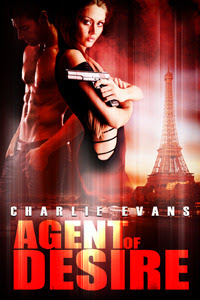 Adrenaline junkie Jessica Booker joined the CIA to take on bad guys and flirt with danger. And with perks like sleeping with hot foreign men added into the mix, well…it’s a pretty sweet deal.

Now in Paris, she’s about to take on her second assignment as an official agent but is caught off guard when her new partner turns out to be Sims, a sexy CIA instructor. Sims was hard enough to resist in the classroom—in the field, he's a dangerous distraction. To make matters worse, Jessica’s target is a gorgeous Frenchman who manages to put her in the most compromising positions—positions she doesn’t altogether mind.

With rogue agents, classified secrets, and tempting men at every turn, this mission will prove to be the first real test of her skills, both in and out of the bedroom.

Agent of Desire is Charlie Evans’ debut novel, as well as the first book in her Jessica Booker series. It’s a fast paced, entertaining, and sexy story.
This is told in the first person, from Jessica’s POV. There are a lot of things I liked about this book, including the way it unfolds, and all the twists and turns that kept me trying to figure out who the bad guys really are. It's nice to get this kind of story in which the heroine is the lead, and to see what is normally a man's world from a woman's perspective.

Another thing I really like about it is the heroine. Jessica is a strong, intelligent woman, though she does make some mistakes – trusting the wrong people, to start with – but still in all, a great heroine. She’s got an attitude that screams “don’t fuck with me” but she knows when she messes up and isn’t afraid to admit it. Not all heroines are as honest with themselves as Jessica is.

It's not always easy to tell a story in first person POV and still be able to get inside the hearts and minds of all the characters involved and, I'm sorry to say, that's something I missed in this story. As much as I enjoyed Jessica, I didn’t feel the connection – the draw – between her and the other players.

The bottom line: Ms. Evans is definitely a talented writer and I enjoyed this world she's created. Agent of Desire is an impressive debut novel and start to the Jessica Booker series.

My thanks to the author for providing me with a copy of this ebook in exchange for an honest review.
Posted by Blithely Bookish at 1:22 PM