Dancing on Coals by Ellen O'Connell 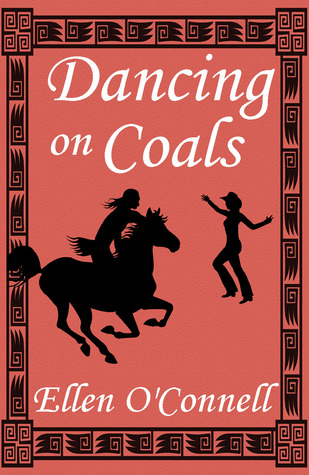 After escaping robbers intent on murder, Katherine Grant says, "I jumped from the frying pan into the fire. Before long I'll be dancing on the coals." The highwaymen were the frying pan; the handsome young Apache who saved her from them was the fire; and the coals? Gaetan.

Rage against the enemies of his people has consumed Gaetan from boyhood. The only use he ever found for any white was to test the sharpness of his knife. Forced by his brother to endure Katherine's company, Gaetan tries to deny what he sees—the white woman has a man's temper and a lion's courage. She has an Apache heart.

In spite of hate, distrust and fear, surviving in the rugged country of southern Arizona and northern Mexico forges a strange bond between Katherine and Gaetan. When the bond turns to love, can they admit it? Can they bear the consequences?

Well, as usual, I’m late the game. So many of my friends have read this book and raved about it. They’ve nudged me, telling me it’s amazing and that I had to read it. Every so often I’d get a reminder that I had it sitting here, just waiting for me to pick it up… and still, I put it off. But, I finally did it and, as usual, my friends were right.
I’m just going to share a few thoughts with you, since there are already so many wonderful reviews on this book.

When I read a book I want the time I spend to be worthwhile, so I’m always looking for stories that make me forget that I’m just reading a book. I love it when I’m swept away to another time and place, living a life very different from my own, a life I’d never otherwise get to experience. That’s what Dancing on Coals was like for me.

For the few days I spent reading this story, I’d close my eyes and try to imagine what it was like to be a lone woman in an unfamiliar land, finding myself living with a people whose traditions and ways of life were completely foreign to me. What it was like to have the wind whipping through my hair while on horseback, riding faster and faster, as if my very life depended on it, because it did. Seeing the ocean for the very first time. Falling in love with someone I had every reason to hate, and being thankful for all the horrible things that happened to me because without them, I would never have met him.

This is a tale that is, at the same time, both ugly and beautiful. It took me places I’ve never been, made me feel things I’ve never felt. And most importantly, it's a beautiful love story, and I can’t ask for more than that.
Posted by Blithely Bookish at 1:40 PM