Tempted by Her Innocent Kiss by Maya Banks 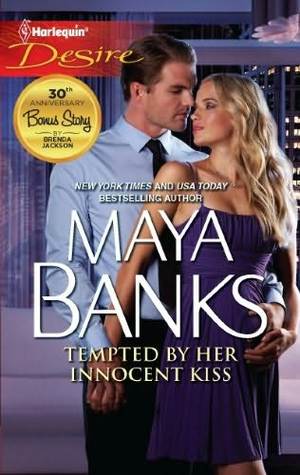 Tempted by Her Innocent Kiss is the third book in Maya Banks’ Pregnancy and Passion series, and another great story. Like the other books in the series, the plot isn’t terribly unique, but Ms. Banks has taken what would have been predictable, fleshed it out, tweaked it and made it into something distinctively hers.


About the book: Devon Carter is all about business. He’s smart, determined and power hungry, and will do whatever he has to do to continue climbing the ladder of success... even if that means marrying William Copeland’s daughter in order to secure a business merger between Tricorp and Copeland Hotels. Marrying Ashley certainly wouldn’t be a hardship; she’s beautiful, loving, and easily managed, so the way Devon sees it, it’s a win-win situation.

Ashley Copeland has been sheltered and pampered her entire life. She’s vivacious and impulsive and madly in love with Devon Carter. When Devon asks her to marry him, she’s the happiest woman in the world until, on their honeymoon, she learns that their marriage was the stipulation of a business agreement between her father and Devon. She feels betrayed, and yet, she still loves Devon, so rather than run out, she decides to stay and become the kind of woman Devon needs, even if it means losing herself.

I’m a big fan of “heroes who pull their heads out of their asses and finally see the light” stories, and this one definitely fits into that category. There is so much emotional depth to this story that I found myself holding my breath at times, waiting to see what was going to happen next, and how Devon could possibly atone for his actions. It was heartbreaking watching Ashley try to become someone she wasn’t, while at the same time seeing Devon realize that he was in love with the woman Ashley had been all along, not the woman she was becoming. Ashley started out a bit on the weak side as far as heroines go, but really did hold her own by the end of the story.

The bottom line: Tempted by Her Innocent Kiss is a story for those times when you need a little more emotional angst and something a little deeper to read. The characters are people you can believe in, care for, and cheer for as they work towards their happily ever after, and breathing a contented sigh when they finally reach it.

This book was provided by netgalley.com in behalf of Harlequin Desire.
Posted by Blithely Bookish at 10:55 PM