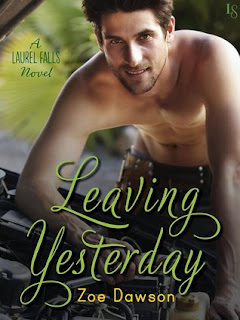 Rafferty Hamilton doesn’t plan on putting down roots anytime soon. With her divorce final, the hotel heiress has left Manhattan behind to scout new locations for her family’s chain of resorts. Which is why it’s so frustrating to be stranded in Laurel Falls while a good-looking, slow-talking, Stetson-wearing mechanic takes his sweet time with her overheated coupe.

A decorated vet who paid his dues in Afghanistan, Trace Black can fix anything with an engine and get it revving—even Rafferty’s ridiculous sports car. He couldn’t say the same for the knockout driver, who looks like she’s never gripped a gear shaft in her life. Women like Rafferty don’t usually stick around in Laurel Falls, but Trace finds himself showing her everything his hometown has to offer before she cruises on down the road.

As the days pass, Rafferty finds herself charmed by the pace of life and the openhearted warmth of the residents. She’s even tempted to trust again—and it’s all thanks to Trace. He’s not the kind of guy she’s used to falling for, but he just might be the man she needs.
Leaving Yesterday is the first book in Zoe Dawson's new Laurel Falls series, and it's everything I love about small town contemporary romance. The people of Laurel Falls are down-to-earth, hard working, and loyal. They've got hopes and dreams, trials and triumphs and, no matter what, they will always have your back! All this makes them people I can't help but cheer for and care about.

One of the things I most enjoyed about the story - and there are many things to enjoy - is Trace's unshakable devotion to his family, especially his youngest brother, Harley, who suffers with PTSD, the result of his time in the Marines and a mission gone very wrong. Trace feels the guilt of of Harley's illness, blaming himself because Harley was following in Trace's footsteps when he enlisted, wanting to be like his big brother. There's a lot of poignancy throughout the book, but this... this really tugged at my heart.

Another person to love is Rafferty. Sure, she's a product of her upbringing, but she is - without a doubt - her own person. This becomes crystal clear when she sets aside her 'assignment' and opens her eyes to the beauty of the people and the town she found herself stranded in. She might be a wealthy, big city girl, but she's not ostentatious, nor is she foolish enough to let a good thing pass her by!

The bottom line... Leaving Yesterday is a wonderful start to this series, which promises to be an amazing one. If you love Susan Mallery, Kristan Higgins, or Rachel Gibson, you won't want to miss out on the romantic, passionate, captivating world and people of Laurel Falls.

An ARC was generously provided by Random House Publishing Group - Loveswept. In appreciation I'm giving them an honest review.