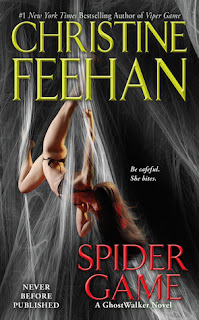 The Cajun dive in the middle of the godforsaken swamps wasn’t exactly Trap Dawkins’ idea of fun. But the GhostWalker wasn’t there for a good time. He was looking for her. Cayenne. It’s where she found her victims. Poor suckers. Then again, who wouldn’t want to leave a place like this with a woman like her?

It’s not Cayenne’s fault. Locked up, experimented on and never knowing kindness, she was bred this way—with a heart of pure venom. Trap understands her. He survived his own dark past and he shares her desire for getting even. But now Trap’s greatest danger is Cayenne herself. Because what’s inside her is hard to control—especially when it’s aroused by a lover as reckless as Trap.


I absolutely love the direction Ms. Feehan is taking the GhostWalkers series. The world is scary intense and, truth be told, just a little bit freaky! Cayenne’s enhanced DNA being that of a Black Widow spider was more than a little unsettling for me because I’ve been bitten by one of those bitches and it hurts. Like, mad pain! To imagine an adult woman with those traits... **shudder**

As I shared in my review of Viper Game, it’s true the stories are changing from the way they were in the beginning, but they're changing in ways I would expect them to, given Peter Whitney's evil (and totally twisted) desperation to create the perfect soldiers. The experiments are more and more extreme, and more and more heartbreaking. And, as with Viper Game, I found Spider Game to be more exciting, more captivating, and more intriguing than the last several books in the series.

I understand the GhostWalkers are alpha and demanding, but too often Trap's comments directed at Cayenne were demeaning – so much so that I found them offensive. There came a point when his apologies meant nothing to me. Cayenne is insecure around other people, and understandably so, but because she put up with so much of Trap's garbage she came across as a needy woman who suffered from the "Anyone Is Better Than No One" syndrome. Trap seemed oblivious to her discomfort and acted out in completely unacceptable ways. In fact, I’m not sure any amount of remorse or groveling could have redeemed him in my eyes – and most importantly, in my heart.

I think longtime fans of the series will love this installment – if you can overlook Trap’s appalling behavior toward Cayenne. I was thrilled to see so many familiar GhostWalker faces and, especially with Violet Smythe back, I expect there to be more crazy twists and turns in upcoming stories! What a wild ride this has become!

Click here to purchase Spider Game from Amazon
Posted by Blithely Bookish at 12:00 AM