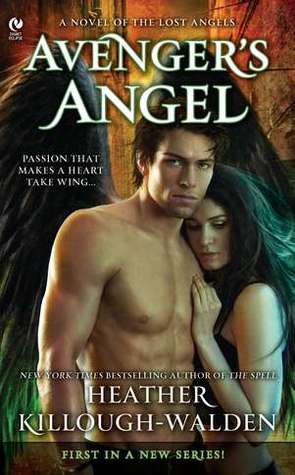 Long ago, the Old Man gathered together his four favored archangels, Michael, Gabriel, Uriel, and Azrael. He pointed to four stars in the sky that shone brighter than the others. He told the archangels that he wished to reward them for their loyalty and had created for them soul mates. Four perfect female beings—archesses.

However, before the archangels could claim their mates, the four archesses were lost to them and scattered to the wind, beyond their realm and reach. The archangels made the choice to leave their world, journey to Earth, and seek out their mates.

For thousands of years, the archangels have searched. But they have not searched alone. For they are not the only entities to leave their realm and come to Earth to hunt for the archesses. They were followed by another. . .

Avenger’s Angel is the first book in Heather Killough-Walden's new Lost Angels series, a theme that seems to be quite the rage these days. Angels, whether they’re 'of Dark,' 'of Light,' 'Fallen' or 'Arch,' are the “in” thing to write about, and so I appreciated this fresh take on their world. The quote I opened with tells you all you need to know about the storyline of this series, so I’ll skip right to my thoughts on this book, in particular.

As I’ve said, I enjoyed this fresh telling of the story, but I had a really hard time with the world building and character introduction early on in the book because there was just so much to absorb. Names, titles, powers, abilities… I felt like I needed to take notes just so I could follow along. For example; just as each angel had a name, they also had their title; Michael, the Warrior Archangel; Uriel, the Angel of Vengeance; Gabriel, the Messenger Archangel; and Azrael, the Angel of Death. Now, the names and titles were used interchangeably and that was a problem for me because when reading any story, I want to feel like I’m part of what’s going on. For example, if “Michael turned to the Angel of Death and said…” I want to know who he’s talking to, Uriel, Azrael, or Gabriel? I don't want to have to stop and think, 'Wait, which angel is that?' Unfortunately, I found that to be very distracting and disruptive to the flow of the story. Yet, I feel the need to mention that I found there to be a lot of repetition in places, so maybe that was the author's way of trying to help us remember those details?

Now for the good stuff! I’d say it was about a third of the way into the book when everything finally clicked into place for me and the story took off. From that point on, I honestly couldn’t put it down. It was fast paced and action packed, and with bad guys coming out of the woodwork our Archangels were kept on their toes! Uriel suddenly became this incredibly sexy, alpha being who was protective and tormented… and I fell hard for him. Ellie, his archess, is a female who had her own brand of tormented to deal with, and I loved how they finally came together, a perfect match. That said, I do want to share with you this little snippet, Uriel and Ellie’s initial reaction to one another:

No, that was impossible. He was relatively invincible. Being hit on the head would do nothing to him but make him a little cranky.

She was really standing there before him. She was real; he could see her, hear her— he could even smell her. She smelled like shampoo and soap and lavender.

Jesus, he thought, unable to refrain from letting his gaze drop down her body and back up again. She was everything that he had ever imagined she would be, from her tall, slim body to her long jet- black hair, and those indigo blue eyes the color of a Milky Way night. Her skin was like porcelain. Her lips were plump and pink and framed perfect, white teeth. She was an angel.

The bottom line - While Avenger’s Angel is not without its flaws, it really did turn out to be a very unique, sexy and entertaining story. I'm excited by the groundwork that has been laid for the future books, and I'm really looking forward to reading more about Michael, Gabriel, Azrael and their Guardian, Max, and even Samael, one very bitter angel known as The Fallen One. They each have their own demons to battle and I can't wait for their stories. Overall, this really is a 3 star read – slow to start but a great finish, but because it did leave me so anxious to get my hands on the next book, I’m bumping it up to 4 stars. I have no doubt whatsoever that this will be an awesome series, one I have every intention of continuing.

I wish to thank Signet Eclipse for providing me with a copy of this ebook via netgalley.com.
Posted by Blithely Bookish at 3:23 PM