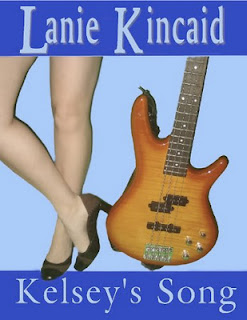 Kelsey’s Song is the first installment of The Wilder Books and let me just tell you, it was a delightfully refreshing story! I don’t think I’ve ever read a book quite like it, but with Kelsey’s calm strength, JD’s vulnerability but never-say-die spirit, and three adorable kids between them, I was captivated from the first page to the last. Then, as if that weren’t enough, throw in JD’s band-mates, a great storyline and I couldn’t turn the pages fast enough!

Kelsey Conklin is a single mom, raising two children on her own. It’s rough going, but like all things in her life, she just does what needs to be done and keeps moving forward. One day while shopping with her kids at a local Target store, she hears a young girl throwing the temper tantrum from hell! Feeling sorry for the child’s father, Kelsey does what she can to help him out, accepts his thanks, and heads home wondering what had brought the man and his daughter to this point in their lives.

JD Hewitt gave up a lucrative career as a stock market investor to pursue what he loves most – making music!! He’s a guitarist, singer and songwriter whose dream is to have a successful band, so he packed up and moved to Nashville where a man's dreams can come true. Then three years later his ex-girlfriend died of cancer and, out of the blue, JD is handed a daughter he hadn’t even known about. Juggling this newfound fatherhood and his struggling band, Wilder, JD is nearly at his wit’s end when he meets and befriends Kelsey, an amazing woman who just seems to have it all together. The friendship they develop is fun and mutually beneficial, but as the months go on, it becomes obvious that friendship isn’t quite enough for either one of them. But afraid of ruining the incredible relationship they have, neither Kelsey nor JD are willing to open up and admit their true feelings.

There are just so many things right about this story, but for me what stood out most was the way these people came together, loving and supporting, each helping the other to fulfill their dreams, and redefining the word "family." See, I think that too many people believe that a family has to be made up of blood, or some legal document that decrees them as such. But one of my favorite parts of this story came when Kelsey looked around and realized that the people she had surrounded herself with were the true definition of family.


Kelsey wanted to stop time. Her kids were happy, truly happy. She now had the same size family as she’d had previously, but she was willing to admit that this one was better. In so many ways. Oh, God, Andrew forgive me. But the weight that had been lifted from her when Andrew died became even lighter when JD stepped up to really share the load.

He didn’t vacuum her living room, or do her laundry, or mow her lawn. But she had a sounding board that she trusted when she didn’t know what to do. When she wasn’t sure she’d handled something right. When she just prayed for someone to tell her that they saw she was doing her best. It was far more than she had imagined, knowing that someone had her back. No one had had her back for as long as she could remember.

The bottom line - Kelsey's Song is not without its flaws, but those things aside it is a beautiful love story, in every sense of the word. While the relationship building went on a bit longer than I would have liked, I was pleased that their sexual relationship didn't happen overnight. In fact, it was made all the more believable because they didn't become intimate 'til near the end of the book, and when they did, despite the awkwardness afterwards, it felt so right. This book is a light and funny story, with a sweet, romantic and steamy ending. I will absolutely be looking for more by Lanie Kincaid.

My sincerest thanks to Griffyn Ink for providing me with an ecopy of this book, via netgalley.com
Posted by Blithely Bookish at 9:51 PM