A Vampire for Christmas, an Anthology 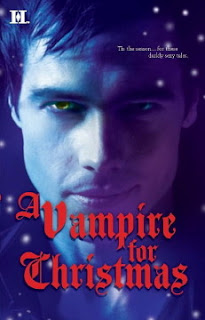 There’s nothing like curling up with a great romance during the holidays, and when those romances come from an anthology, I’m even more excited because the stories are short, varied and almost always have that magical happily ever after. And another plus is that they often give me a chance to get to know authors whose work I might not have never tried, otherwise. However, one of the problems inherent with anthologies is that the authors have to perform a balancing act when contributing to them, especially when their contribution comes from a world they’ve already created through a series. They have to give those of us who are unfamiliar with their series enough information to keep us from feeling lost while at the same time not filling too much of their limited and very valuable page time with unnecessary information. One of the stories in this collection suffered from ‘too much information’ and another suffered from ‘not enough,’ but all-in-all, I enjoyed this collection and have discovered authors whose work I’ll be watching for.

So here we go, my thoughts on each individual story.

1. “Enchanted by Blood” by Laurie London – This novella is part of the Sweetblood series and I can tell that Ms. London has created a unique, exciting world, but even though I enjoyed this ‘second chance at love’ tale, I think I would have enjoyed it a lot more if I had been following the series before reading this book. As I said above, it’s a tough balancing act for an author, and in this case I felt like I was getting way too much background information laid out for me rather than being able to watch it unfold naturally. Maybe had the plot been about something other than the politics of their world, more time could have been devoted to the characters themselves which should always be the driving force of any romance book, regardless of the length.

And speaking of the characters; from what little I saw of them, I really liked Trace, but Charlotte didn’t do a lot for me, which I think could have been remedied if more time had been spent on character and relationship development. The sex definitely sizzled, but their romance didn’t give me the warm fuzzies I like, especially in my holiday reads.

All that said, I’m definitely interested in reading more of this series because I really enjoyed Ms. London’s easy, comfortable style of writing and something tells me that I’d quickly get hooked on the world of Sweetblood! - 3 stars

2. "Monsters Don't Do Christmas" by Michele Hauf – I had very high hopes for this story because it started so out strong and I was sure it would hold, but then it just fizzled. There was so much potential for a great tale, but I found myself doing a lot of skimming and I was never able to become all that invested in either Daniel or Olivia, which in turn made it hard to stay interested in the story. I wish I had learned more about Daniel being changed and the world he gave up. I get being bitter and all, but I could have totally invested in him if I had felt, and not just been told about, his anger.

What I did like about it was the way Christmas commercialism was played down, and how Daniel, who believed himself to be a monster, didn’t let the darkness rule him. It was exactly the kind of Christmas story I would normally love, but something about the delivery just didn’t grab me. – 2.5 stars

3. “When Herald Angels Sing” by Caridad Pineiro – I really enjoyed this story. It was such a sweet, romantic, sexy tale about learning from your past mistakes, admitting you were wrong, and being willing to sacrifice anything and everything for those you love. As Damien and Angelina learned, “believe in the power of love and all of Heaven will be yours.” 4 stars

4. “All I Want for Christmas” by Alexis Morgan - Now see, very rarely is it that a novella can earn 5 stars because to do so the author has to be very careful to strike the perfect balance of world building and character development, while making it all emotionally compelling. And let’s be honest, that’s hard enough to do in a full length novel, let alone a short one. But this story had it all. The plot was interesting, yet didn’t require a lot of page time to set up, which made more character and relationship development possible, and in the end, allowed me to become totally invested in Eagan and Della, as well as the secondary characters, Tenn, Lupe, Harry, Daniel... I'd love to know more about them all! – 5 stars

The bottom line - While I enjoyed all of the stories, or at least parts of them, the last two carried the anthology and I'll definitely be reading more by these authors.

This ebook was provided by netgalley.com in behalf of HQN Books.
Posted by Blithely Bookish at 9:02 PM