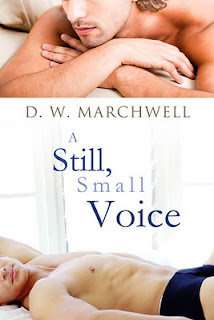 From the cover - After a student’s accusation of sexual assault destroyed his reputation, Noah Birchwood left the teaching career he loved. The school system that should have protected him and an ex-lover who should have known better shattered his confidence, and it took Noah six years and another university degree to finally get his life back on track.

He loves his new job as a computer programmer and keeps busy on weekends performing at a drag club with his best friend, Aiden. It’s there that he meets shy, chivalrous Oscar, the owner of the club and, just maybe, the love of Noah’s life. But everything turns upside down when a specter from his former life moves in next door. Noah will have to face his fears and discover the truth about his ordeal if he wants to move past it once and for all and face the future with Oscar at his side

A Still, Small Voice is a m/m story that touches on an emotional issue and had the potential to be a very powerful tale about letting go, moving on, and living rather than merely existing. I was drawn in to Noah’s world as he was finally able to recount the details of the most devastating event in his life, but sadly, that’s where the potential for a poignant story ended, and this book almost landed on my ‘did not finish’ shelf. I am, however, very glad I stuck it out because in the end, it was a sweet, romantic and uplifting story.

I’ve not read anything by D.W. Marchwell before, so I had no idea what to expect. I found the writing and the storytelling to flow well, and I loved that I could feel the joy, the humor, and the awkwardness, even as an adult, that comes when getting back on the relationship horse again, especially after the betrayal of someone you thought you could trust. The romance was good, and I was definitely happy to see Noah moving on, but the ‘specter from the past’ part of the story that also had such great potential not only fizzled, but felt unresolved.

As for our characters, I loved Noah, Oscar and even the ‘villain’ Paul, but Noah’s best friend, Aiden, drove me up a wall. I’m not into the overly flamboyant characters, be they male or female, and Aiden reminded me too much of a movie my mother watched every single time it was on TV, Auntie Mame. That woman frightened me - Auntie Mame, not my mother - and to this day I cringe when I think of her. I'm sorry, Aiden, but you never stood a chance with me.

The bottom line – This was a really sweet story that had the potential to be a fantastic one. I liked it and found it entertaining, but because I was able to so clearly see what could be, yet wasn’t, I was a bit let-down. I will, however, be looking for more by this author because as I said, I enjoyed the easy, comfortable flow of the writing and storytelling.

This ebook was provided by netgalley.com in behalf of Dreamspinner Press.
Posted by Blithely Bookish at 7:08 PM