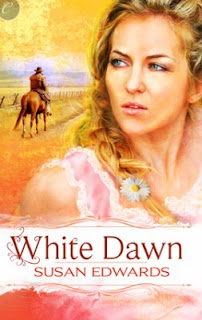 The harsh bellow shattered the early-afternoon peace, startling Emily Ambrose. Her hands froze in midwring as her gaze flew from the pile of laundry to her father, a tall, rail-thin man with a wild mane of ash-brown hair. The tails of his overcoat flapped angrily behind him as he marched down the bank with a Bible in one hand and a whip-thin switch tucked beneath his arm. He stopped less than a foot away from where she knelt in the shallow water.

Emily Ambrose lived in fear of her Christian missionary father’s wrath and no matter what she did, she just couldn’t please him. It had never taken much to set him off, but when she was nearly raped by a Jesuit priest, and then blamed for tempting the “man of God,” beyond endurance, her father, mother and Emily left the mission that had been their home, disgraced. As far as Timothy was concerned, Emily was a nothing more than a sinner and he would allow no more shame to fall on the family because of her. He’d had all he could take, so he did the unthinkable – he left Emily, ‘satan’s spawn, the devil’s daughter,’ alone in the wilderness, for God to deal with, uncaring of whether she lived or died. Well, I'm happy to say that God 'dealt' with all of them.

Historical Romance novels hold a special place in my heart, be they Medieval, Georgian, Victorian, Regency, Colonial or American West, but believe it or not, I hadn’t yet ventured into the world of Native American historicals. Now, granted, only a small portion of this book was devoted to the Native American theme, but thanks to Susan Edwards, I’ll most definitely be reading more!

Ms. Edwards' beautifully detailed descriptions of the cultures and landscapes, hardships and joys of life in the wilderness, captured both my heart and my imagination. I couldn’t help but admire Swift Foot, Emily and John as they found so much happiness in the smallest things, and through that happiness found the strength to not only survive, but to trust, to love, and to do the right thing, regardless of the cost to their hearts. They were hardworking, honorable and devoted, and I couldn’t help but love.

The bottom line – While White Dawn wasn’t without its flaws, I really enjoyed this tenderly poignant, romantic and passionate story, and will definitely be reading the next book in the series!

Note: Originally published in paperback in 2002 as the seventh book in Ms. Edwards’ White series, White Dawn is actually, chronologically speaking, the first book series, and I would strongly recommend readers new to these books to read it as such. I was happy to learn that this entire series is being re-released in ebook format by Carina Press, with the first four books – White Dawn, White Dusk, White Shadows and White Wind becoming available November 21, 2011.

This ebook was provided by netgalley.com in behalf of Carina Press.
Posted by Blithely Bookish at 3:19 PM