No Holds Barred by Callie Croix 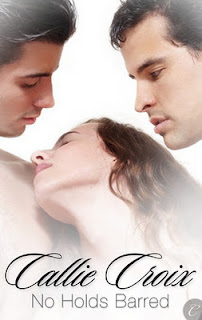 Eyes wide, Caitlin set her wineglass on the granite counter and stared at her fiancé in disbelief. “You would share me? Actually share me with another man?”

Cait and her fiancé, Nathan, have a very satisfying sex life – or so she thought. But when out of the blue, Nate asks Caitlin if she’d be interested in a three-way with his best friend Liam, it not only shocks her, but has her worried that Nate might be getting bored with the way things have been.

Based on her reaction, it’s clear to Nate that this isn’t something Caitlin is interested in, and that surprises him. But he’s head over heels in love with her and isn’t going to force or coerce her into anything she doesn’t want. The thing is, he’s pretty damned sure she does want it, but fear of what might happen afterwards is standing in her way of letting go and experiencing this with him.

Will they be able to convince Caitlin to give into her desires and let them take her to heights of pleasure she has only ever fantasized about? Of course they will, silly! Otherwise there wouldn’t be a story, right? And oh, sweet Mary! What a hot story it was! But that said, when reading ménage, I’m always concerned about the fallout of these one-time-deals. Will everything be okay, or will there be jealousy and hurt feelings? In this story, I was glad to see that it bothered Nate when Cait kissed Liam goodbye, because it made Nathan seem more like a man in love rather than just a guy who didn’t mind sharing his fiancé.
The bottom line - No Holds Barred was a short, hot read, and I’m hoping, really hoping, that we’ll get a story for Liam, who sounds like a man in need of some lovin’. Generally, I like more intensity in these kinds of stories, where military men are involved, but this was okay, otherwise. I’m definitely looking forward to reading more by Callie Croix, who also writes romantic suspense as Kaylea Cross.

This ebook was provided by netgalley.com in behalf of Carina Press, in exchange for an honest review.
Posted by Blithely Bookish at 3:27 PM

Email ThisBlogThis!Share to TwitterShare to FacebookShare to Pinterest
Labels: menage