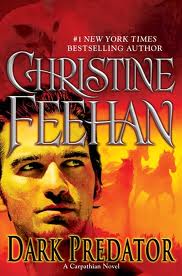 Dark Predator is the 22nd installment in the Carpathian series and I just not sure how I feel about the book. I can understand why some will be disappointed in it, and while I definitely enjoyed it, this wasn’t exactly the story I had anticipated. I’ll try to explain.

Zacarias was, in my opinion, perfect. He was true to what I would expect from a Carpathian who is as ancient as he is. He’s kept himself at a distance from his brothers and from modern civilization as a whole and he really is a loner, in every sense of the word. Physically, mentally, emotionally… he’s a man who embraces solitude. Because of that I can see how he would have no idea, whatsoever, what a modern woman would be like. How independent they are, how self sufficient. They’re no longer the shrinking violets in need of protection that they used to be and are more capable of taking care of themselves. Had he been around more, he’d know that they had to “evolve” in order to survive, and this is especially true of the Carpathian women.

For the most part, Marguarita seemed to have a foot in both worlds. She was thoroughly modern and self sufficient, and yet she seemed to know exactly what Zacarias needed and why, and had no problem accommodating him. She accepted him for the male he is, and while she tried to help him see things through her eyes, she didn’t resort to the kinds of ridicule that some of the females in the stories have when they met their lifemates, and I respected her for that. BUT, I never got the feeling that she was surprised, or honored, to be Zacarias’ lifemate, and that’s something I really had expected.

Regarding the story itself, there didn’t seem to be as much action, or overall plot resolution or progression as there has been in the last couple of books, and that surprised me. The first ½ of Dark Predator seemed entirely focused on Marguarita’s and Zacarias’ relationship. Normally that would be great, but the problem is that because Marguarita pretty much did whatever Zacarias wanted, there wasn’t a lot of page time devoted to the relationship building - that struggle for independence and acceptance that normally occurs in this series. I didn’t mind that Marguarita didn’t fight and argue, not at all, because she was true to her nature. True to the woman she’d been raised to be. She was still a strong female, but she was exactly the old fashioned kind of woman Zac needed for his Lifemate. But with that lacking in Dark Predator, the relationship building seemed uneventful to me.

And what happened to the celebration we always see when a male finds his lifemate!? There was nothing… just… nothing. This is Zacarias we’re talking about! Why didn’t we see his brothers celebrating life with him! And how very sad that, even though he has his lifemate, he’s still so alone. If there’s one thing I want out of the next book, it’s to see Zacarias and his brothers able to be together, to be a family again.

So, as I said, I really enjoyed the story, but I have to be honest and tell you that I didn’t love it, and that makes me very sad. Zacarias deserved a story with depth, passion and intensity, and in my opinion, he didn’t get it.
Posted by Blithely Bookish at 9:34 AM