Again the Magic by Lisa Kleypas 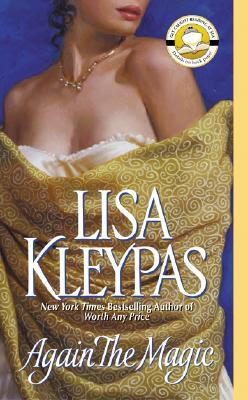 She gave him her innocence . . .Lady Aline Marsden was brought up for one reason: to make an advantageous marriage to a member of her own class. Instead, she willingly gave her innocence to John McKenna, a servant on her father's estate. Their passionate transgression was unforgivable -- John was sent away, and Aline was left to live in the countryside . . . an exile from London society . . .and he took her love.

Now McKenna has made his fortune, and he has returned -- more boldly handsome and more mesmerizing than before. His ruthless plan is to take revenge on the woman who shattered his dreams of love. But the magic between them burns as bright as ever. And now he must decide whether to let vengeance take its toll . . . or risk everything for his first, and only, love.

Lisa Kleypas has done it again, and in a big way. Again the Magic is a wonderful story with so many dimensions and so much depth that I was up until the wee hours of the morning, unable to put it down. This story is actually a “prequel” to the Wallflowers series. While I’ve never seen it listed as a numbered book in the series, the characters in Again the Magicare featured heavily in It Happened One Autumn, book 2 of the Wallflowers,  as well as in the other Wallflower novels.

There are so many good things to say about this book that I don’t know where to start. As usual with Kleypas’ writing, we have characters who are so well developed that they cease to be words on a page and become living, breathing people. We can imagine them as friends, family, lovers and even enemies.

Again the Magic actually tells 2 stories. There is the main hero/heroine theme revolving around Lady Aline and McKenna, and a secondary hero/heroine theme revolving around Lady Olivia Marsden, Aline’s younger sister, and Gideon Shaw, McKenna’s American business partner. However, I find it difficult to describe Olivia’s and Gideon’s part of the story as secondary because it was so full, so detailed, that it felt to me as though it were its own, singular novel. And that made me very happy!

I found Again the Magic to be refreshingly more honest than your usual fluffy historical romance novel. The reactions of the characters were more in keeping with what I would have expected given the depth of their feelings for one another and their lack of control over certain situations.

Anger and frustration are emotions that linger near the surface and are often the first emotions we feel when being faced with situations that are beyond our ability to change. Sometimes, for whatever reason, the people we love just can’t seem to trust us to love them enough to see past their flaws, be those flaws physical or emotional. Such is the case with Lady Aline and the scars she carries from an injury she received in a kitchen fire. I don’t want to go into detail here and give away too much of the story, but her shame over the deep, severe scars keeps her from accepting McKenna’s love. She just can’t seem to trust him to love her enough…

McKenna has no idea why Lady Aline keeps pushing him away, but finally he has had enough and is ready to return to America, alone, a heartbroken man. But through a unexpected intervention by an unlikely person, Aline is given the opportunity to finally unload her burden and tell McKenna the truth and I loved his reaction. He didn’t just pat her on the head and say “It’s going to be ok, love, I forgive you and we’ll get past this.” Nope, in fact, he let her have it with both barrels. He held nothing back when he described the hell she had put him through and this is the type of reaction I would have expected from a man so desperately in love. He made her listen as he poured out the anguish he had been feeling, and then he summed it all up in just a few simple words:

“My God.” The blood rose higher in his face. “What if the situation were reversed and I was the one who had been hurt? Would you have left me?”

“Then why did you expect anything less of me?”

The entire exchange was so well written, so perfect and exactly the reaction I would have expected (and hoped for) from a man who thought he had forever lost the love of his life. I was cheering him on with every word he spoke, and when he finally took her to bed I loved how he wouldn’t allow her to hide her scars from him.

And again we see, between Olivia and Gideon, the same honest reaction from Olivia regarding Gideon’s drinking problem when he asked her to marry him and she turned him down. She didn’t sugar coat anything, nor did she give him an ultimatum, but told him, "…I won’t subject myself to the process of losing you little by little, until you’ve either killed yourself or become someone that I don’t recognize.” Again, this is the kind of reaction I hope for from my heroes and heroines. She wasn’t going to sit by and watch the man she was in love with slowly deteriorate by his own actions.

As I said, there are so many good things about this story that I really don’t know where to start or how to cover them all. Suffice it to say that Again the Magic has a charm, an honesty and a depth and breadth to it that has earned it a place on my list of all time favorite reads.

Whether you’re looking for an excellent stand alone novel or want a series to read, I highly recommend Again the Magic and the Wallflowers.


Again The Magic - Prequel to the Wallflowers

1.Secrets of a Summer Night

2.It Happened One  Autumn

4.Scandal in the Spring


Posted by Blithely Bookish at 1:30 AM