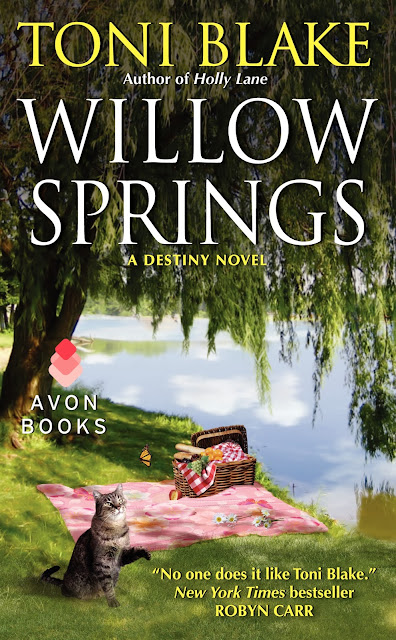 This lovesick matchmaker has finally met her match!

Amy Bright might be the best matchmaker in Destiny, Ohio, but she's desperately shy when it comes to her own love life—and helpless when it comes to Logan Whitaker, the best friend whom she's head-over-heels in love with. So Amy decides to become Logan's secret admirer, sending him sensual love letters steamy enough to unseal their own envelopes. One letter leads to another, one thing leads to another, and then comes an unplanned kiss…

Overcoming a tragedy from his life as a firefighter, Logan needs a friend. Thank goodness for Amy. But when a woman from Logan's past resurfaces right as some anonymous letters send Logan's pulse hammering, suddenly he doesn't know what he needs—a reliable friend, or a passionate lover? One smoking-hot kiss could change everything…but will it ruin a one-of-a-kind friendship, or show Logan and Amy that they've already found everything they need, right here in Destiny?

Willow Springs is the fifth book in Toni Blake’s Destiny series, and one emotional story. I’ve never shed so many tears while reading any book as I did with this one, and it’s not even story of hardship, illness or death. This is a tale of “first love” and all the pain, heartache, hope and joy that comes with it, even when that love doesn’t find you until you’re 30 years old.
Let me get this out of the way right up front – this is not a light read. It’s angsty, dark, and heartbreaking… but it’s also comforting, hopeful and romantic. There were times I was so angry with both Logan and Amy that I wanted to scream, and other times I was completely understanding of their actions. Times I cheered for them because I could see what they could have, times I wanted them to throw in the towel and just move on because they couldn't see what they could have. And as hard as this was to read sometimes, I never even once considered giving up because I knew once it finally came, their happily ever after would be worth every minute it took to get there.

There were people and things I liked, people and things I loved, and people and things I could have done without, but any book that can evoke such strong feelings, a book that keeps me up until 3:30 in the morning and then is the first thing I think of a few hours later when I wake up... that's a story I won't soon forget because it touched me deeply. Through the tears, the smiles, the anger, the understanding… I couldn’t stop reading, just had to find out what would become of Logan and Amy, and that is the beauty of Toni Blake’s writing.

Because I so related to Amy's feelings of being just average - not gorgeous like her friends, not talented, not special, I’m going to leave you with my favorite scene, one that was heartbreaking, but so filled with hope. What makes this my favorite? It's because this is when Amy finally understood that she deserved better. That she was worth more than she was getting.

“Logan, what you said about figuring out what you want to do about us—you don’t have to figure it out. Because . . . I already did. I don’t think I’m interested anymore.”

She could feel his surprise, even without glancing his way. “Interested in what?”

“You. Us. That way. Romantically.” She opened the door now, preparing to go.

But his shock was so great that it practically filled the car, even if she saw his eyes widen on her with only her peripheral vision. “What do you mean?”

“The thing is,” she began, “if it’s such a hard decision . . . well, I’d rather be with somebody who doesn’t have to decide, who just knows. Who knows I’m amazing. Who knows I’m the best thing that ever happened to him. Who takes me with my faults. That’s what I deserve. And if you’re not that guy—then a relationship with you would never be enough for me.”

And with that, she got out of the car in her bikini and sarong, said, “Thanks for the ride. Goodnight,” then shut the door and walked away.


My vision of Logan Whitaker 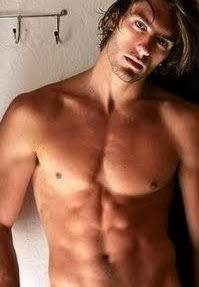 Check back tomorrow for my review of Again the Magic, by Lisa Kleypas!

And be sure to visit the other blogs participating in The Avon Affair: