All Or Nothing by Dixie Lee Brown 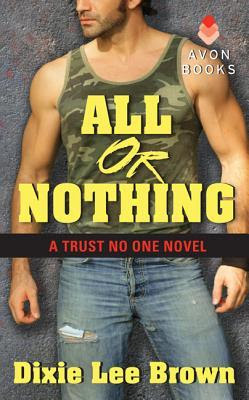 All or Nothing is the first book in Dixie Lee Brown’s Trust No One series. It’s got action, adventure, bad guys, good guys, mafia thugs, arms dealers, sassy female characters, sexy male characters, and even an awesome dog. In fact, it’s got all the things I need to enjoy my romantic suspense reads and yet, this time, it wasn’t quite enough.

Someone wants Cara Sinclair dead. One minute she's halfheartedly enjoying an Oregon Coast casino, and the next she's being chased by hit men. Rescued by a total stranger, Cara must decide whether she can trust her safety to this Joe Reynolds and his team of ruthless mercenaries. The more time she spends with Joe, the more her desire for him grows. But can he truly protect her, or is she placing them all in mortal danger?

Joe agreed to protect Cara as a promise to a dying man. He never expected to feel such heat between them, or her total lack of faith in him. Now he must convince her that her only hope lies with him. Because Joe is starting to realize that he won't be satisfied with just saving her life . . . now, he wants it all.

Sounds like a great story, doesn’t it? Well, the potential was definitely there. The writing is good, the premise is compelling, and most of the characters are appealing people whose stories I want more of, especially Joe who I loved!

So what’s the problem, you ask? Well, for many readers there might be no problem at all, but this is my review, my opinion, so I’ll give it to you straight as I can.

Heroines who, because of their stubborn, unthinking, foolish actions, put the heroes in danger, time and time again... well, that’s the nail in the coffin of any story for me. Despite Cara’s knowledge that her step-brother is a cold blooded killer who had even put a hit on her, and despite the fact that her ex-husband is a mafia bad boy who wants her dead – or as his personal punching bag – she continually puts herself and those people trying to protect her in danger. Nothing, and I mean nothing chaps my hide faster than that.

The bottom line: I’m so frustrated because, like I said, the writing is good, the premise is awesome, and most of the characters are intriguing people I want to know better. I kept waiting for Cara to redeem herself, but in my eyes, she never really did. I so, so wanted to love this story, but sadly, I didn’t. Am I willing to toss in the towel? No, but I sure hope the next heroine is worthy of the hero.

All or Nothing was provided by Avon Books in exchange for an honest review.
Posted by Blithely Bookish at 1:00 AM