Saved by the Rancher by Jennifer Ryan 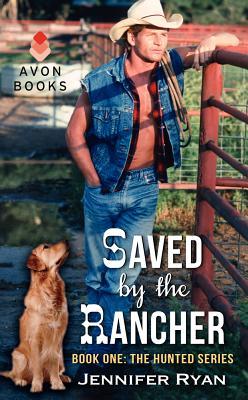 Today I'm reviewing:
Saved by the Rancher by Jennifer Ryan

Saved by the Rancher is the first book in Jennifer Ryan’s The Hunted series, and my first read of this author. The story starts out with a horrific scene of physical abuse, and Jenna Caldwell Merrick running for her life. This scene is definitely not pretty to read due to the viciousness of the attack, but this is Jenna's life and it's on the line.

David Merrick is one of the wealthiest men alive and is used to getting what he wants, so when Jenna gets tired of the abuse and leaves him, he takes great pleasure in hunting her, and doing whatever he has to do to get her back. Intimidation, fear, abuse... he'll stop at nothing, but when those things don’t work, he’s more than willing to kill her. David is a sick SOB and loves seeing Jenna's fear, knowing he has the physical strength and the money to make her suffer.

We’re introduced to Jenna at the lowest point in her life. She’s come close to death too many times at David’s hands, but she won’t let him scare her into going back. She’ll run until she’s free or dead, but she won’t give up. Jenna has several safety nets in place to help her avoid being found, but time after time, he somehow tracks her down. With the help of her attorney, Jenna finally finds a place to hide, a place to rest, with people who are willing to protect her.

Jack Turner gets a call from an old college friend, as it turns out, to help hide a client. Jack doesn’t know this upfront, but it quickly becomes clear that this pretty lady who’s obviously been abused needs his help. Jack hasn’t been interested in a relationship in years because the women he's dated are always more into his wallet than they are into him. But there’s something about Jenna that draws him to her, and he can’t fight the attraction, and neither can she. But can Jack really keep Jenna safe and convince her to settle down with him when all she wants to do is run? He’s not sure of the answer to that, but he’s not willing to give up without a fight.

Saved by the Rancher is an entertaining story and, with a little more attention to editing, flow and pacing, could have been a 4 or 5 star read. What really kept the story from reaching that level is, considering all the abuse Jenna has endured, how long she’s run, how often she’s nearly died, I felt that her relationship development with Jack was rushed. We were told how afraid she was, how untrusting of men and not willing to settle down, and yet, we didn't see that in the story because it was no time at all before she was having sexual feelings for Jack. It’s a full length novel so there was plenty of time to flesh it out, to allow that attraction to grow, and that would have made the story and the romance much more enjoyable.

I would probably label this a romantic suspense/thriller, given the brutality and abuse Jenna suffers at David’s hands, as well as the psychological game of cat and mouse he enjoys playing. This is an intense read, nothing light and fluffy about it because of that constant fear of Jenna being discovered in the back of your mind. The plot is exciting, fast paced, and steamy, and there times I couldn’t turn the pages fast enough to find out what might happen next.

The Hunted series has the potential to be amazing, and I’m looking forward to reading more by Ms. Ryan.

My thanks to Avon Books for providing me with a copy of this book in exchange for an honest review.

Books in the series so far:

Posted by Blithely Bookish at 1:30 AM