Sacrifice the Wicked by Karina Cooper 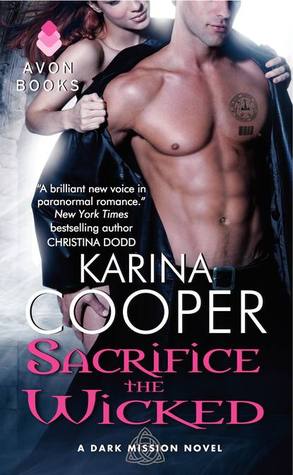 Parker Adams has always done what’s expected of her . . . until a double agent with nothing to lose ignites a passion she doesn’t dare give in to.

Mission Agent Simon Wells is everything Parker Adams has been trained to fight: manipulator, murderer, spy… witch. But for her, what makes Simon most dangerous is his mesmerizing sexual magnetism, powerful enough to tempt even the famed ice queen of the Mission. Though she knows better, each encounter with the deceptive agent leaves her craving more.

Simon isn’t a man to let go of what’s his, and his pursuit forces Parker, a woman he can’t get out from under his skin, to make a stand that could destroy her. If they can work together, they might survive the politics that have enslaved their devastated world—or fall victim to the pitfalls of desperation, bone-deep mistrust, and a hunger that threatens to consume them.

Sacrifice the Wicked is the fourth book in Karina Cooper’s Dark Mission series, and is an intriguing, exciting, sexy story!
I began this book having not read the previous installments, and I’ll say this right up front – I really don’t recommend it. If you have the opportunity, I strongly encourage you to start at the beginning and work your way through

Based on this book alone I can tell you that the world Ms. Cooper has created is complex, compelling, and without a doubt, fascinating, but it was Simon and Parker’s relationship progression and their off-the-charts sexual chemistry that drew me in and kept me turning the pages. The storytelling is so well done that even though I probably should have set it aside until I could read the other books, I couldn’t put it down.

I’m looking forward to reading the series from the start because this is one hell of a world and I want to explore every bit of it!

My thanks to Avon Books for providing me with a copy of this book in exchange for an honest review.


Be sure to visit the other blogs participating in the Avon Affair: