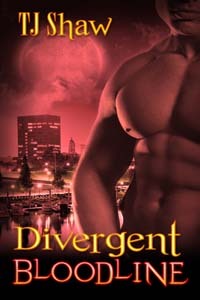 Divergent Bloodline is T.J. Shaw's newest novel and it's one exciting story!

While tracking down a killer, clues lead homicide detective, Viviane Taylor to suspect, Julian DeMatteo. From the get-go, DeMatteo unsettles and irritates her. He is a force she has never encountered, someone who excites her even though he is forbidden. Her instincts warn that he’s hiding something and she is determined to uncover those secrets.

As king of the vampires, Julian DeMatteo protects the immortal clans. So, when the beautiful, bullheaded cop embroils herself within his world, he must choose between the woman who reminds him of the humanity he has lost or his loyalty to his people.
As confusing emotions awaken inside her, Viviane can either accept her fate as the one chosen to save the immortal race or lose her soul to darkness. With Julian’s help, she fights an evil that would rip her apart in order to forge a new future with the homicide suspect who has stolen her heart.

I am a vampire genre junkie so when Ms. Shaw asked me to read and review Divergent Bloodline I was both thrilled and apprehensive. Thrilled because I haven't read a great vampire book lately and needed a 'fix', and apprehensive because none of the vamp stories I've recently read have WOW'd me and I was concerned that maybe I was becoming bored with what has been my favorite PNR genre.

Anyway - my apprehension was for naught! Julian and Viviane are people I came to care about, who kept me reading into the wee hours of the morning because I simply had to see how they'd work things out and come together for their happy eternally after.

The bottom line - Divergent Bloodline is fast paced, exciting, edgy, romantic, and passionate. I wavered between 4 and 5 stars but decided to round it up because the world Ms. Shaw has created has the makings of a great series and I am truly hopeful that she continues writing it.

An eARC was provided by the author in exchange for an honest review.
Posted by Blithely Bookish at 12:30 AM